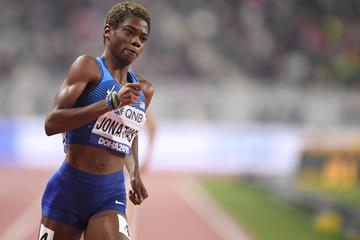 Focus on mindset and purpose elevates Jonathas to 400m elite

It may be slightly incorrect to say Wadeline Jonathas could have been lost to the sport but she certainly may never have been found were it not for the intuition of a high school track coach.

The rising one-lap force – who finished fourth in the 400m at World Athletics Championships Doha 2019 - was a keen basketball player at South High Community School in Worcester, Massachusetts, when that track coach, impressed by her on court speed, approached her and asked if she could join the track team. Jonathas, a 16-year-old tenth grader at that time, agreed and despite her lack of experience was awarded MVP in her first season.

Some five years on Jonathas is a multiple winning NCAA champion and sub-50 second 400m performer. A young athlete with oodles of potential and who could yet emerge as a serious challenger to the “big two” in her event, the Doha gold and silver medallists Salwa Eid Naser and Shaunae Miller-Uibo.

Why sport? 'I just wanted to be useful'

Born the third eldest of seven children in Gonaives, Haiti, she has happy memories of her formative years living in the Caribbean nation.

“It was extremely fun and adventurous, I recall spending most of my time outdoors playing with other kids,” she recalls.

Sport, however, was not common in Haiti, particularly for young girls, so it was not until the family relocated to the US 11 years ago for a “better life” did the sporting bug bite.

“Shortly after entering high school I joined sports groups, I wanted to use my time after school to be proactive and not just stay at home and watch TV. I wanted to be useful.”

She enjoyed basketball before the chance switch to athletics. The long-limbed athlete quickly gravitated to the 400m and in her final year at high school placed sixth in 56.60 in the Emerging Elite race at the national high school championships in Greensboro, North Carolina.

Yet although a talented high school athlete, it was after starting college life at UMass Boston when her true talent started to flourish. In her freshman year, under the coaching guidance of Consandria Walker-Hall and Hamza Abdul, she set or equalled 17 PBs in the 100m, 200m, 400m and long jump and snared NCAA Division III indoor 200m silver and 400m gold before completing the outdoor 200m and 400m national double. She also made a three-second improvement on her 400m PB in the course of the year – posting a best of 52.81.

“Consandria and Hamza helped me get to the point where I was fast enough and performed at the level I needed to start excelling in my career,” she adds. “The highlight was, perhaps, the 2018 Indoor NCAA. It was my first time doing four events at NCAA – and I managed to win them all!”

Given her outstanding record, Jonathas was not short of college recruiters to an NCAA Division 1 school and between her sophomore and junior year she opted to head south to attend the University of South Carolina in the “drive to get better and face new competition.”

Another move, this time to South Carolina

Hailing from the US northeast she found adapting to the South Carolina heat “a constant struggle.” However, possessing a deep resolve she slowly adapted and in her early days there proved her commitment to the cause during a pain-inducing 800m time trial.

“The drive to perform pushed me to go out fast and with courage during the first lap, but I ran out of steam at 730m,” she recalls. “The rest of the race was hilarious to watch, and I even felt sick for multiple days.” However, watching her dedication she gained respect from her teammates and over time she fit into life at her new college.

Coached by Karim Abdel Wahab, Jonathas has thrived under his guidance and believes both her “technique and strength” has improved.

“He’s very understanding, patient, smart, humble and puts himself in the athlete’s shoes,” she explains of Wahab’s qualities. “The training is not much different but harder.”

Focusing almost exclusively on the 400m, she emerged a much stronger athlete in 2019. Ignoring a slight blip at the NCAA Indoor Championships when she failed to advance from the heats, she was nothing short of sensational.

Across the course of the outdoor season she set seven lifetime bests - one of the which was posted when running a blistering 50.60 to take the NCAA 400m title in Austin, Texas.

“It was exciting, and a dream come true, because it showed how much potential I had moving from divisions,” she says.

Yet if her NCAA success was impressive this achievement was surpassed when competing against the top professional athletes at the US Championships in Des Moines just two weeks later.

Finishing third in the final in a PB of 50.44 – just 0.23 behind winner Shakima Wimbley booked her spot for the US team to compete at the World Championship. It was a performance which may have surprised many, but not Jonathas.

“My expectation was to make the team,” she said matter-of-factly. “My coach believed that I could make the team and I didn’t doubt my coach. I took his words and trusted him, knowing that we had prepared for moments like this. I never doubt myself regardless of the stage.”

Boosted by winning the USA v Europe competition in Minsk in 51.01 she then transferring such self-belief and confidence to the World Championship stage and excelled in Doha.

Simply focused on improving, she progressed serenely through the rounds – setting a PB of 50.07 in the semi-finals and then ran a race of great maturity in the final to finish fourth – and top American – in a PB of 49.60.

“I was very confident going into the championships, and I was ready to put my best foot forward, which I believe I did,” she recalls. “The performance of Shaunae and Salwa was outstanding, they did phenomenally well but they made me realise, I can push myself even more.”

Her maturity showed again three days later when she anchored the US squad to victory in the 4x400m relay.

In December she took the decision to turn pro, although in her early days in the paid ranks she insists little has changed. She is currently completing her senior year at the University of South Carolina and continues to be guided by Wahab.

Believing her “mindset” and “purpose” are two of her strengths she has two simply goals for the 2020 season.

Two goals which if she achieves will make the US quarter-miler impossible to ignore in what is currently one of the sport’s most compelling athletics disciplines.