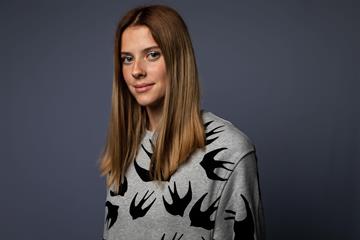 In mid-September, a week before she travelled to Doha for the World Athletics Championships, Yaroslava Mahuchikh opened a present from her friend.

Inside was a necklace, on which hung the five Olympic rings – a gift for her 18th birthday that captured who she is and where she wants to be.

“My friend hopes I go to the Olympic Games,” says Mahuchikh, who was named Female Rising Star at the World Athletics Awards in Monaco last month.

After the year she’s had, getting to Tokyo should be a relative breeze for the Ukrainian high jumper, whose ascent to international stardom in 2019 took everyone by surprise – including her.

Back in June, Mahuchikh stood beneath the arches of the 1912 Olympic Stadium in Stockholm and explained her goals for the summer. By then she already had – at 17 years, 226 days – become the youngest athlete ever to win a Diamond League, soaring over an outdoor PB of 1.96m three weeks earlier in Doha.

But in truth that didn’t change things. Her goal was still the European U20 Championships in Boras, Sweden. “That’s my important one, my target,” she said.

But what about the World Championships?

Her hesitancy made sense. After all, Mahuchikh was still in school, cramming hard in Stockholm for her final exams the following week back home in Dnipro, a city of about one million residents in central Ukraine.

“It’s difficult but I’m trying,” she said of juggling high-level athletics with academics.

How could she envision, there and then, that not only would she make it to Doha, but she would soar over a world U20 record of 2.04m in the high jump final, earning her a shock silver medal behind high jump queen Mariya Lasitskene?

All of a sudden, Mahuchikh’s role model had become her rival.

“If we’re speaking about high jump, I try to look at what Lasitskene does,” she says. “She has very good technique and results.”

Like many, Mahuchikh’s entry to the sport came through following her sibling’s lead. Neither of her parents were into athletics – her father did canoeing, her mother gymnastics – but older sister Anastasia was into karate and athletics. Mahuchikh wasn’t big on karate so chose to join her older sister at the local athletics club, starting out as a sprinter, hurdler and long jumper.

Her gift for high jumping wasn’t immediately apparent, Mahuchikh recalling how she was unable to get over 1.40m in her first competition. At the age of 13 she came under the tutelage of Tatyana Stepanova, a former international 400m hurdler, who to this day has guided her career with a careful hand.

Her training is conservative, far from the workload which is the norm for her senior rivals. Mahuchikh trains five days a week for between one and two hours, and gym or weight training is not yet a part of her routine. “I did a little bit of gymnastics too,” she says.

In late June, a couple of weeks after she finished her exams, Mahuchikh travelled to Stanford in the United States and cleared two metres for the first time, finishing third at the Diamond League.

But her chief goal for 2019 remained the European U20s. Once gold was secured in Boras with a clearance of 1.92m, she jacked the bar up to 2.02m, an indication of the height she believed was possible.

It would have to wait a few months. In that high jump final in Doha, Mahuchikh was one of four athletes to go clear at 2.00m, with fellow Ukrainian Yuliya Levchenko (another of her role models), USA’s Vashti Cunningham and reigning champion Lasitskene left in the medal hunt.

Mahuchikh took three attempts to get over 2.00m, and then something special happened. She cleared 2.02m at the first attempt to leave just her and Lasitskene in the battle for gold, which Lasitskene edged on countback due to a first-time clearance at 2.04m.

Nonetheless Mahuchikh was overjoyed with her performance after a third-time clearance to grab silver. “When I jumped 2.04m, I didn’t understand it,” she says. “I was thinking I would do it another time. I didn’t believe it.”

It set off a chain reaction back home that would, inevitably, make her life a little different. The first sign of that was when she called her Dad, who “shouted congratulations” at her. “He was very happy, to be silver medallist and (jump) a world junior record – he wanted (me to) jump world records,” she says.

Four months earlier in Stockholm, Mahuchikh was asked how often she was recognised in Ukraine after her accomplishments in recent years, which included titles at the World U18 Championships and the Youth Olympic Games. “Only people who know the sport and understand athletics,” she said. “These people know and they ask me about high jumping, my life and my performance.”

But after Doha, all that changed.

“When I come back to Dnipro, people wanted to take pictures with me and congratulate me on the streets,” she says. “I was so happy that our people, our population, watched the competition and supported Ukraine.”

That status brings new demands. Over the past couple of months there have been multiple photo-shoots, a spin-off of fame that Mahuchikh is happy to embrace. In her spare time she loves sketching and writing, and she’s planning to soon start a blog. “I think it will be about my life of a sportswoman who goes to training camp,” she says. “How to live, how to train.”

Like most 18-year-olds, she’s also working on her Instagram page. Though Mahuchikh has little trouble sleeping the night before competitions, the leftover adrenaline afterwards means she often lies awake into the early hours, during which time Instagram is her chosen obsession. She’s also a huge reader of novels, her favourite being After You by British writer Jojo Moyes.

She’s been back studying since the autumn, enrolling at the Dnipro Higher School of Physical Education. “I want to be a coach, to start with children,” she says. “In our group, we have 10 girls and so I help my coach like an assistant.”

As an Olympic year starts to looms on the horizon, Mahuchikh knows the expectation will be different, but this far out she’s not willing to specify her goal for the Games. Much like the World Championships, her key focus will be on getting there.

“It’s the prestige,” she says. “It’s my dream to be in the Olympic Games. It’s every athlete’s dream.”