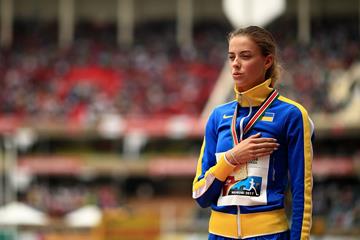 Precocious newcomer Mahuchikh aims to progress one step at a time

Watching Yaroslava Mahuchikh compete in the girls' high jump final at the World U18 Championships Nairobi 2017, many probably assumed she had been jumping since she was a young child.

Actually, she has not. Far from it.

“I started with the high jump when I was 13,” said the Ukrainian, who is only 15 now. And she is now the world U18 champion, and an impressive one at that.

She took the title in Nairobi with an outdoor world age-15 best of 1.92m, equalling the championship record and jumping a full 10 centimetres higher than anyone else, the biggest winning margin in the history of the championships.

And that came in her first major international event. “I have only competed outside of Ukraine in international matches before,” she said. “This was my first major championship event. I honestly did not expect to do so well. I'm just very happy that I represented Ukraine well and got my best result here.”

That championship record she equalled was set back in 2003 by another Ukrainian, Irina Kovalenko. The country has had great success in the high jump, with six women who have cleared at least two metres, including 1999 world champion Inga Babakova and an even more illustrious list of male jumpers, from Valeriy Brumel to Vladimir Yashchenko to Bogdan Bondarenko.

Has the country discovered a high jumping magic formula?

“There is no secret to our success,” says Mahuchikh. “It all comes from training. Preparation and positive mental approach are the most important things.”

But even with so many stars coming from her home country, Mahuchikh says if there is one jumper she is looking up to, it is Maria Lasitskene.

“I really like the way she jumps, and I actually think we are similar in a way.” And it is true; in some ways, the Ukrainian looks like a younger version of the world champion, with a similar body type and jumping style.

Despite the fact she is already the third best U20 athlete in the world this year and the second best in Europe, she will not be competing at the European U20 Championships taking place in Grosseto, Italy this week. “My main remaining goal for this year is the European Youth Olympic Festival in Hungary,” she said.

Even looking to next year, Mahuchikh is still keen to focus on competitions within the U18 age group. “I want to go to the European U18 Championships and win there,” she said. Asked about the World U20 Championships, she only answers with a “maybe”.

Training in Dnipro, Ukraine’s third largest city, with her coach Tatyana Stepanova has obviously been working well for her. Makhuchikh has already improved her best by 16 centimetres this year. Is a two-metre clearance possible, perhaps even next year?