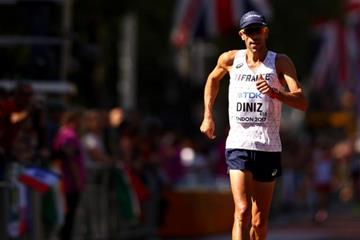 For several years it appeared as though the charismatic Frenchman was destined never to hit the top of the podium at a major global championship. He missed selection for the 2004 Olympic Games, failed to finish at the 2008 edition in Beijing, was disqualified at the 2012 Games and was struck by a catastrophic intestinal issue when leading at the 2016 Olympic Games.

Yet casting aside any doubt, Diniz delivered in sumptuous style on The Mall by obliterating the field to win by a victory margin in excess of eight minutes, clocking the second-fastest time in history for the distance.

This was clearly not a man who shared the doubts of others.

“I always believed in myself and I did not let go,” he says. “The Rio episode was, of course, painful. Unfortunately that day I had big health problems but I fought for values other than victory.

“The fact I finished in Rio (he placed eighth) meant I was not mentally destroyed by the experience and this gave me belief for the World Championships. I had to remind myself that I was ahead in Rio and it was only a medical problem which denied me gold.”

Sicne 2013, Diniz has been coached by Gilles Rocca from his local EFS Reims Club and given technical guidance from Switzerland-based Italian Pietro Pastorini. The combination has worked well and in their first full season together, Diniz set a world record of 3:32:33 at the 2014 European Championships in Zurich to secure a hat-trick of continental 50km titles.

“I am quite impulsive by nature but what Gilles taught me is to manage my emotions better during a race,” he explains. “He made me understand I was alone on the start line on the day of the race and his job was to prepare for that day, giving me the tools to cope with and respond to every possible race scenario. Then on race day he is there to refocus me. This leaves me in control of my decisions and it has brought me a lot of confidence.

“The brain is capable of making us move mountains and I proved that by breaking the world record.”

Post-Rio, however, Rocca advised his veteran race walker to adapt a slightly different strategy by focusing on one solitary 50km race for the season. The coach figured that Diniz’s past approach of several 50km races per year had not always netted the best outcome. The duo also focused more on speed.

In 2017 the intention was to race more regularly over the shorter distances, but a stress fracture of the ribs during the French Championships in March sidelined Diniz for seven weeks. A car accident in May then caused another rib fracture which further hampered the father-of-two’s preparation.

The injuries caused Diniz to abandon plans for an altitude training trip and instead he trained at home in Reims in north east France. Adopting this approach to intentionally keep mentally fresh ahead of his World Championships assault proved astute and he went into his quest for 50km glory in London full of confidence.

“I knew I was in very good shape,” he explains. “I just had to reproduce what I do every day in training. I did not think becoming world champion but only to show some opponents who doubted me that I could be a threat. I really wanted to show a different image of myself from Rio. I loved the London course, but I tried not to put too much pressure on myself. I just wanted to be 110 per cent ready for D-Day.”

When D-Day came in London, this time Diniz unequivocally delivered as he put on a race walking masterclass to wipe away any shred of doubt about his major championship temperament.

In one of the most dominant displays of the 10-day World Championships, Diniz held a clear advantage at 10 kilometres and simply never took his foot off the throttle. He hit 20 kilometres in 1:27:18 – 23 seconds quicker than he clocked while leading in Rio. By 30 kilometres his lead on the increasingly forlorn chasing pack was more than three minutes.

There would be no dramatic unravelling in London as he crossed the line in a championship record of 3:33:12, a time that no athlete other than himself has ever bettered.

“With five kilometres remaining, I knew I had the race won and I took full advantage to savour every minute,” he recalls. “I had such a feeling of joy and relief when I crossed the finish line that I had finally won the title.”

Born in Epernay – ‘the capital of Champagne’ – it was inevitable Diniz would celebrate his victory with a glass. The trained oenologist selected the vintage ‘Blanc de Craie’ from Henri Giraud, “a 100 per cent Chardonnay from the mountain of Reims, ageing in oak barrels from the Argonne Forest”.

Diniz celebrated his 40th birthday on New Year’s Day and, just like his vintage drop of champagne, he appears to be improving with age.

“Age is irrelevant, but I think the secret of success is to take maximum pleasure from the training and to be surrounded by good supportive people,” he says. “I am also motivated to be a part of a strong, collective French squad with a strong team spirit.”

He doesn’t intend on slowing down, either, and he has some major targets over the next few years.

“I have to preserve myself physically, so as not to hurt myself,” he says. “My main objective for 2018 is to win a fourth successive European 50km title. Longer term, because I have never won an Olympic medal, I would like to put that right in Tokyo (when Diniz will be aged 42), which would be a great way to finish my career.

“I’m also sure I can go faster in the 50km and beat my world record again,” he adds. “That would be the icing on the cake.”