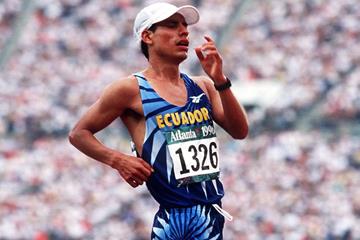 This week in Buenos Aires, Argentina, the IAAF will celebrate with the 13 national member federations of South America the centenary of the area association, ConSudAtle.

Athletics as it is known today didn’t reach South America until 1918, when the Confederation was formed, but the sport existed on the continent before then. Small groups of athletes, mostly European immigrants, became the early pioneers of the sport.

Chile's Luis Subercaseaux competed at the inaugural Olympic Games in Athens 1896, finishing sixth in his heat of the 100m.

The South American Athletics Confederation ConSudAtle – the oldest confederation in the world of athletics – was formed in Buenos Aires on 24 May 1918. Its original members were Argentina, Uruguay and Chile.

The inaugural South American Championships were held in Montevideo in April 1919. Only Chile and Uruguay competed. The most impressive performances came from Uruguay’s Isabelino Gradín, also an outstanding footballer, who won the 100m-200m double.

Throughout the long and rich history of the championships, Argentina's Juan Ignacio Cerra owns the most individual gold medals at a single event, having won nine hammer titles. Argentina's Osvaldo Suárez, meanwhile, has the most gold medals at individual events with 11 from the 5000m, 10,000m and half marathon combined. Factoring in relay events, Brazilian sprinter Róbson da Silva tops the list with 14 gold medals.

At the 1924 Paris Olympic Games, Argentina’s Luis Antonio Brunetto gave the continent its first global medal, taking silver in the triple jump with 15.42m, which stood as the South American record until 1949.

It was another Argentine who went on to grab the first ever Olympic gold medal for South America.

Argentina's Juan Carlos Zabala on his way to winning the marathon at the 1932 Olympic Games, becoming the first South American athlete to win an Olympic gold medal (Getty Images) © Copyright

Argentina’s long distance running tradition was underlined at the 1948 London Games. Delfo Cabrera repeated Zabala’s gold at the marathon (2:34:51.6), and Reinaldo Gorno would add further glory with his marathon silver medal at the 1952 Olympic Games behind legendary Emil Zatopek.

The late 1940s also marked the arrival of one of South America’s greatest ever athletes, Adhemar Ferreira da Silva.

Da Silva, coached by Dietrich Gerner, improved Brunetto’s South American triple jump record in 1949 by jumping 15.51m twice. Da Silva set a total of five world records in his career, up to his last of 16.56m in Mexico City (1955).

More significant than his records, Da Silva became South America’s only double Olympic champion, with victories in Helsinki in 1952 (16.22m) and Melbourne in 1956 (16.35m).

At those 1956 Games, Chilean Marlene Ahrens took the silver medal in the javelin, still the only Olympic medal won by a South American, man or woman, in throwing events.

At the extraordinary 1968 Olympic Games in Mexico City, Brazil's Nélson Prudêncio earned triple jump silver and held the world record for mere minutes when he jumped 17.27m in the final. He would repeat his bronze four years later in Munich in 1972 (17.05m).

João Carlos de Oliveira wrote the next remarkable page for Brazilian and South American triple jump. In 1975 he set a world record at the Pan-American Games in Mexico City with 17.89m. The talented de Oliveira won Olympic bronze in 1976 and 1980, but his career tragically ended in a road accident in 1981.

Cruz, coached by Luiz Alberto de Oliveira, would also go on to obtain the 800m silver medal in Seoul in 1988 and was South America’s first medallist at the IAAF World Championships when taking 800m bronze in Helsinki in 1983.

At the 1988 Olympics, Robson da Silva became the second South American sprinter to reach the Olympic podium, taking bronze at 200m. Later on, he was a member of the 4x100m team that grabbed the Olympic bronze in 1996. Da Silva was also a three-time 200m winner at the IAAF World Cup.

At the 1992 Olympic Games in Barcelona, Colombia's Ximena Restrepo gave her country its first Olympic medal in athletics. Restrepo, who took bronze at 400m with 49.64, also became the first South American woman to reach the Olympic podium in a track event.

At the 1992 IAAF World Half Marathon Championships, Argentina's Antonio Silio wrote the most recent glorious page of his country's long distance running tradition with his silver medal in 1:00:40.

In 1995, Surinam’s Letitia Vriesde became the first South American woman to win an 800m medal at the World Indoor Championships, taking the bronze. Later in the season, she took silver at the outdoor World Championships in Gothenburg. Vriesde would reach the podium again in Edmonton 2001 (bronze).

At the 1998 Berlin Marathon, Brazil's Ronaldo da Costa became the latest South American to set a world record at an Olympic event, clocking 2:06:05.

Irving Saladino, winner of the long jump at the 2008 Olympic Games in Beijing (Getty Images) © Copyright

Previously, in 2007, Saladino became the second South American to win a world title. In a memorable battle with Italy's Andrew Howe, Saladino grabbed the gold on his last jump with 8.57m, becoming the first South American to earn a gold medal at a jumping event in the World Championships.

There was to be more global long jumping success indoors when Brazil’s Mauro Vinícius da Silva took both the 2012 and 2014 world indoor titles.

Triple jump tradition, as strong as ever

Colombian Caterine Ibargüen competed in her first Olympic Games in 2008 at high jump, but her career would have an outstanding breakthrough in 2010 when she was formally brought to the triple jump by Cuban coach Ubaldo Duany.

In terms of medals, Ibargüen is the most successful South American athlete in the history of the World Championships.

Her triumphs inspired Venezuelan Yulimar Rojas, who also has to credit a Cuban coach for her breakthrough: Iván Pedroso. A prolific all-around jumper, like Ibargüen, Rojas fully concentrated on triple jump in 2015 when she won the South American title.

In 2016, Rojas went on to take the world indoor gold and was second to Ibargüen in the historic final in Rio de Janeiro, at the first Olympic Games on South American soil. Rojas’s battles with Ibargüen became epic: in 2017 the Venezuelan dethroned the Colombian by taking gold at the World Championships. In 2018 Rojas repeated her world indoor title.

Also, at the 2016 Rio Games, Brazilian Thiago Braz da Silva won the pole vault in dramatic form with a 6.03m Olympic record, creating one of the most memorable moments for the host nation.

The 2017 World Championships were the most prolific ever for South American athletes, with five medals, two of them gold. Colombian Eider Arévalo’s win in the 20km race walk added to Rojas’s success in the triple jump.