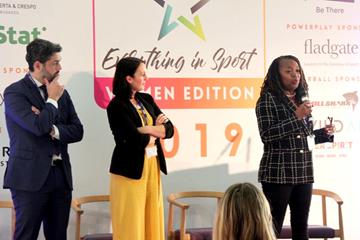 Everyone in athletics can contribute at all levels, says Hightower

At last week’s inaugural ‘Everything In Sport: Women Edition’ event in London, World Athletics’ Gender Leadership Taskforce Chair Stephanie Hightower outlined the measures taken by World Athletics to increase representation across all areas of the sport.

Everything in Sport aims to bring together sport executives and decision-makers from around the world to drive sport forward, on and off the field of performance. ‘Everything In Sport: Women Edition’, a two-day event of talks and workshops held at London’s Olympic Stadium on 3-4 December, was created out of the desire to increase the number of women leading and influencing in sport, and to develop solutions to the cultural barriers which currently exist globally.

In her lock note talk – The First Lap towards 2027 Gender Balance – Hightower explained why World Athletics wrote minimum gender targets into its constitution.

“World Athletics is rightly proud of its gender equality at elite level competition. It took us a generation to reach this,” said Hightower, who on Wednesday was appointed co-chair of the 2020 Everything in Sport: Women Edition alongside Debbie Jevans. “But this is not what we see in our member federations or our area associations. We wanted everyone in our sport, no matter which area they sat in or what they did, to believe they have the ability to contribute at all levels – including the top job.

“We set targets, which was an intentional strategy to be actionable rather than aspirational, as we didn’t want to leave anything to chance. We also changed our voting process, so during WA Council elections, Congress had to select a female VP before the male VPs and they had to select the required number of individual female candidates or their vote would be void. This was forceful and, as we saw just a month ago, effective.

“And these conversations led the President, Sebastian Coe, to set up a Gender Leadership Working Group, reporting directly to him to discuss and implement a plan to understand and address what was a vast array of barriers across the world. We found that the barriers were quite different in each area, so we couldn’t create a one-size-fits-all solution.”

The Gender Leadership Taskforce, of which Hightower is Chair, set clear gender-based objectives for all six areas. Among those objectives, member federations, area associations and World Athletics were asked to review the current breakdown of gender in leadership and decision-making positions. They were also asked to identify women who may be suitable for future positions within World Athletics and develop tailored programmes and strategies to support their future progression.

After announcing its goals on International Women’s Day in March 2018, the Gender Leadership Taskforce has utilised numerous seminars and speaking opportunities around the world.

“Since then, clear objectives and strategies have been set and approved by Council, working groups have delivered plans and activities, and women have been elected to all area association boards in 2019,” said Hightower. “World Athletics’ own council targets were also exceeded with eight women elected for Council, including one female vice president for the first time in the sport’s history.”

In her summary, Hightower explained why everyone in the sport, not just women, has to play their part. “Our ‘why’ must be meaningful, our ‘how’ must be measurable, and our ‘what’ must be sustainable,” she said. “And male advocacy is not just desirable; it is essential.”