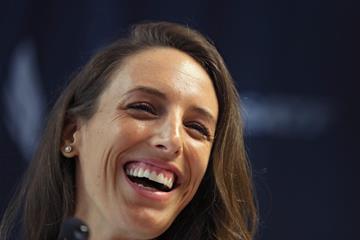 There are people who do extraordinary things in the face of adversity and then there is Gabriele Grunewald.

Ten years after her initial cancer diagnosis, the US distance runner died on Tuesday (11) at the age of 32.

More significantly, though, she inspired thousands of people through the work she did with her foundation, Brave Like Gabe.

Grunewald was initially diagnosed with a rare salivary gland cancer, adenoid cystic carcinoma, in 2009 at the age of 22. She underwent surgery to remove the tumour and went on to have a successful season on the track, but in a routine follow-up a year later, doctors discovered papillary thyroid cancer.

After the year-long treatment, which included a thyroidectomy, Grunewald once again returned to the track and produced world-class performances in the years that followed. She narrowly missed out on making the 2012 US Olympic team in the 1500m, but won the 2014 US indoor 3000m title and reached the final of that event at the World Indoor Championships in Sopot. Later that year, she represented the Americas at the IAAF Continental Cup.

But in 2016, one month after contesting the 1500m and 5000m at the US Olympic Trials, Grunewald discovered that the adenoid cystic carcinoma had returned. She had half her liver removed, along with the tumour and was told she was cancer-free.

A follow-up scan in 2017, however, showed small tumours still present in her liver. Despite undergoing rounds of chemotherapy and immunotherapy throughout that year, Grunewald still managed a handful of races and, just three days before her 31st birthday, competed in the 1500m at the US Championships. That was to be her last competition.

Although her health deteriorated in 2018 and 2019, she and her husband Justin continued to run regularly. They also created the Brave Like Gabe 5k, an annual charity event in St Paul in their home state of Minnesota.

“Throughout each new diagnosis and treatment, I have made the choice to run and train when my body allows,” she said. “It hasn’t always been easy, but it has always been the right decision for me.

“From the very first day I was told I had cancer in 2009, I knew running would be a big part of my journey back to health. It has truly been my refuge; when everything else seems to be going wrong and the outcomes are far beyond my control, I can find perspective and hope on the run.

“Being brave, for me, means not giving up on the things that make me feel alive.

“Founding Brave Like Gabe is my way to give back to the communities who have generously and enthusiastically supported me on this challenging professional-runner-battling-cancer journey.

“I would love to live in a world where rare cancer patients have more treatment options and ultimately, cures. And if I can’t live in that world, I want to help it become a possibility for future patients.”

“I know life is scary and I know we have won the lottery of uncertainty, and it's not fair,” he wrote. “But I still choose our life of uncertainly and at times fear, over any alternative option I could think of.

“You have been given the heaviest of tasks in life; the task of being brave despite feeling enormous amounts of fear. The task of smiling when your throat wells up with pain and eyes want to fill with tears. But I don't think you were chosen by random chance, and again I know that's not fair but you are so amazing at being you and that's why I feel bravelikegabe is so special. Because there isn't a word in the dictionary for what you do or who you are. Brave flails in comparison to what you are.

“At the end of the day people won't remember the PRs run or the teams qualified for but they will remember that hard period in their life where they were losing hope but they found inspiration in a young lady who refuses to give up.”

Tributes have been paid to Grunewald from across the global athletics community.

"Although I never had the pleasure of meeting Gabe, I have so much admiration for her," said IAAF President Sebastian Coe. "Not just for her bravery and the dignity she has shown, but also for everything she has done to inspire other cancer patients. I know that running wouldn’t have been easy for her in recent years but it would have also brought her some comfort during the difficult times. Once a runner, always a runner."

"Courage. Grace. Bravery. It lives on when good people teach us these winning virtues," said USA's 2004 Olympic marathon bronze medallist Deena Kastor. "The running community lost a hero in Gabe due to a rare cancer, yet her gifts live on."

"The running community lost one of our heroes today," said eight-time US champion Sara Hall. "But we will never forget you."