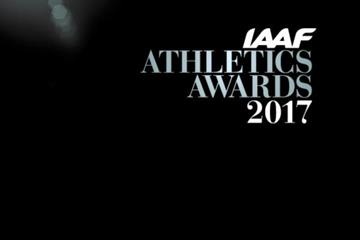 The attention of the athletics world will shift to Monaco this week as the Mediterranean Principality prepares to host the IAAF Athletics Awards 2017, the annual celebration honouring the world's best athletes whose achievements helped contribute to another unforgettable year for the sport.

Nearly 80 of the world's best athletes will gather to help celebrate the past year and to meet with members of the media who will also assemble to cover the numerous events that will be taking place.

The IAAF Athletics Awards 2017 will take place at the Grimaldi Forum on Friday (24), with the ceremonies beginning at 19:30 CET. In addition to the announcement of the men's and women's Athletes of the Year, the recipients of the IAAF Rising Star Awards, Coaching Achievement Award, Women's Award and President's Award will also be revealed. The event will be broadcast live via IAAF Radio.

The ceremony will also name the winner of the inaugural Athletics Photograph of the Year competition. The 25 shortlisted images will also form part of a photography exhibition which will be held alongside the IAAF Athletics Awards from 22-26 November.

The week also includes the 212th IAAF Council Meeting which will take place on Saturday (25) and Sunday (26). The two-day meeting will focus on the day-to-day business of IAAF HQ with updates from IAAF departments, IAAF commissions, working groups and taskforces. These will include the latest report from the IAAF Taskforce concerning Russia.

There will be progress reports from the local organising committees of various 2018 IAAF World Athletics Series (WAS) events. Council will also decide the hosts for three 2020 WAS events: the World Indoor Championships, the World Half Marathon Championships and the World Race Walking Team Championships.

Updates, reports and summaries from all the activities will be published throughout the week on the IAAF website and across its various social media channels.