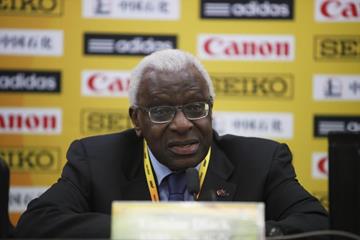 Below are extracts from his speech welcoming one and all ahead of what will be the last IAAF World Cross Country Championships he will attend in his current role, as he will step down as president in August.

“The IAAF competition programme in 2015 begins and ends in China. The IAAF World Cross Country Championships, Guiyang 2015 are the first of four IAAF World Athletics Series events this year which will climax with the IAAF World Championships in Beijing this summer.

“The 41st edition in Guiyang is a truly significant moment for the development of cross-country running, both nationally and internationally. It marks the first time that the championships have ever taken place in China.

“In fact this will be only the third occasion that the IAAF World Cross Country Championships have been hosted in Asia, following on from the 2006 edition in Fukuoka, Japan and the 2009 celebration in Amman, Jordan.

“I am highly confident that this will be a very well organised competition. China is a regular and much respected host of IAAF competitions. Also the venue here in Guiyang has since 2000 hosted both Asian and national cross-country championships.

“Cross-country running is the purest of sporting activities, requiring nothing but courage and determination to succeed. These are characteristics which are at the heart of athletics’ enduring international appeal.

The IAAF World Cross Country Championships represent the very pinnacle of long distance-running competition. The roll call of past champions reads like a ‘who’s who’ of athletic greatness.

"I am therefore especially delighted that Sonia O’Sullivan, the double world cross-country champion from 1998 and one of the great legends of cross-country running, is with us in Guiyang.

“Sonia, as an IAAF ambassador, will help to inspire the current generation the importance and enjoyment of cross country.

“We are also looking forward to four exciting races on Saturday. The course runs across a horse race circuit, and up and down the steep side of the hill which borders it, and offers a true test of endurance.

“Emily Chebet returns to defend her senior women’s title which she won in Bydgoszcz in 2010 and 2013. And while we can expect the usual battles between Eritrea, Ethiopia and Kenya, the team medals won by Bahrain, Great Britain, Morocco and the United States of America in 2013 proved that you do not have to be East African to succeed at cross-country running.

“I warmly thank the local organising committee, the Chinese Athletics Association, Guizhou Province and Guiyang, our official IAAF partners and the hundreds of volunteers, without whose support these championships would not be possible.

“Finally, I wish good fortune to all the runners and look forward to witnessing a great sporting spectacle.”