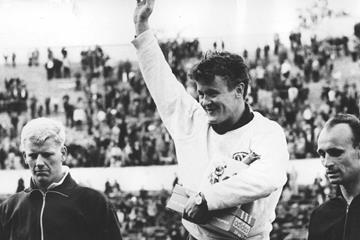 The IAAF is saddened by the news that Jorma Kinnunen, world record breaker and 1968 Olympic javelin silver medallist, has died after a long illness aged 77. Jorma passed away at the family home in Äänekoski, Finland on Thursday night (25) in the presence of family members.

Jorma was head of one of the world’s most successful athletics families. Jorma was father to two sons, Kimmo, 1991 World champion & 1993 World silver medallist, and Jarkko, the 1989 European U20 silver medallist, who died earlier this year, and a daughter Sanna.

Jorma Kinnunen was an inspiration to generations of Finnish throwers. Within minutes of the news of his death being announced messages of respect from many of the country’s javelin greats poured in, including 1974 European champion & Montreal Olympic silver medallist Hannu Siitonen, 1988 Olympic champion Tapio Korjus and 1999 World champion Aki Parviainen.

In 1971 Jorma Kinnunen was one of the creators of the world famous annual javelin carnival in Pihtipudas, the town in which he was born. It’s an event format which has been copied worldwide and has helped produced a conveyor belt of Finnish spear throwing world beaters including present day Tero Pitkamaki and Antti Ruuskanen.

Jorma Kinnunen won silver at the Mexico Olympics in 1968. The following year he set a world record (92.70m) at the Ratina Stadium in Tampere, which last year hosted the IAAF World U20 Championships. A carpenter by trade, Jorma was three-times an Olympian, nine times national champion and had 15 consecutive seasons throwing beyond 80 metres.

Jorma Kinnunen’s nickname was "Äänekoski's Little Giant", a thrower of immensely explosive speed, a style which Kimmo copied under his father’s coaching.

Jorma was an exemplar of Finnish sisu. Therefore few in Finland will ever forget the moment on national TV when, watching his son win world gold in Tokyo, this typically taciturn Finn cried his eyes out in happiness.