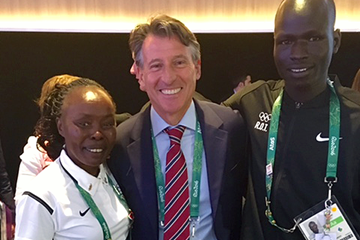 The Refugee Olympic Team was welcomed to the IOC Session on Tuesday (2) by IAAF Ambassador and former marathon world record-holder Tegla Loroupe.

The Kenyan, who is the Chef de Mission of the Refugee Olympic Team in Rio, selected several of the team members during a competition held by the Tegla Loroupe Peace Foundation at the Kakuma refugee camp in north-west Kenya.

The camp was supported by the IAAF’s social responsibility programme, Athletics for a Better World.

“We are ambassadors for the other refugees,” said 800m runner Yiech Pur Biel, who met IAAF President Sebastian Coe at the conclusion of Tuesday’s IOC Session. “We are not bad people. It’s only a name to be a refugee.”

“I would like to thank the IAAF through its social responsibility programme, Athletics for a Better World, and the IOC for supporting my foundation as we strive to give hope and leave a long-lasting impact in the lives of men, women and children who need our help,” said Loroupe.

“Without your support, I and the Refugee Olympic Team present in Rio 2016 today would not be here. I am also extremely humbled to have been chosen to represent the athletics family at the Nutrition for Growth Seminar organised by the Brazilian Government. Children are our future and, as an athlete, I know first-hand the importance of good nutrition and I am constantly reminded of this every day in my humanitarian work IAAF.”