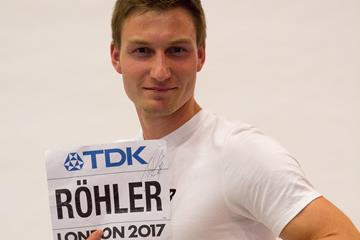 Thomas Röhler and Christian Taylor have joined a growing list of great champions to have made generous donations of competition clothing to IAAF Heritage.

The IAAF Heritage Collection was launched by IAAF President Sebastian Coe in Birmingham on Sunday 4 March on the last day of the IAAF World Indoor Championships with donations of kit from the famous careers among others of Haile Gebrselassie, Maria Mutola, Jason Gardener, Stacy Dragila and Gabriela Szabo. In recent weeks, reigning Olympic javelin throw and triple jump champions, respectfully Röhler and Taylor, have followed suit.

Röhler, 2016 Olympic champion in Rio and the third furthest javelin thrower of all-time, thanks to his 93.90m release in Doha last year, has very kindly donated his autographed German team shirt and competition number from the IAAF World Championships London 2017 where he threw 88.26m (4th).

“I’m pleased to donate my team shirt and competition number. This is about legacy and engagement, reaching out to a new generation of fans and I’m honoured that my kit is now part of IAAF Heritage,” said Röhler.

Taylor, who is a three-time world champion and the 2012 and 2016 Olympic champion at the triple jump, has generously donated the spikes in which he leapt to 17.81m (2nd) in Doha this May, a performance which currently stands second on this year’s world lists. The autographed spikes are bespoke, adorned with Taylor’s personal logo on the sides, with the print on the back of the heal alluding to his big goal - ‘TKO 2020’.

“When I heard about this project to preserve the best of our sport and use it to promote the future I wanted to become involved,” said Taylor. “It’s important that we build interest and understanding about the excitement and beauty of track and field.”

Röhler and Taylor’s marvellous contributions will be on public display next year in Doha, as part of an IAAF Heritage Exhibition in the lead-in to the IAAF World Championships Doha 2019. IAAF Heritage thanks them for their support.

Both athletes were in Ostrava last Wednesday (13) competing at the IAAF World Challenge Golden Spike meeting. In the city’s main shopping mall, there is an IAAF Heritage Exhibition already underway. The IAAF Heritage World / Continental Cup – 1977 to 2018 – Exhibition, as its name implies, celebrates the performances of the first competition which the IAAF created in its own right. The exhibition is open daily from 10am to 8pm until 9 September.

The IAAF World Cup in Athletics was renamed the IAAF Continental Cup in 2010 and the next edition takes place in Ostrava on the weekend of 8 / 9 September.