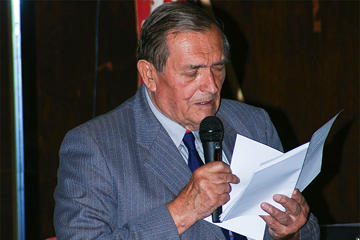 The IAAF is deeply saddened to hear that Viktor Trkal, a well-known athletics official, author, judge and coach in the Czech Republic, died on Sunday (11) at the age of 89.

Born in Prague in March 1929, Trkal started out in the sport as a sprinter before becoming a coach. He became the first president of the newly established Czech Athletics Federation (1969-1973) and later on acted as a vice president (1973-1990).

In the 1980s Trkal led the working group that was assigned by the IAAF to produce the updated scoring tables used for combined events.

Between 1973-85 and 1990-91 Trkal served as chairman of the International Commission of the Czech Athletics Federation and led the bids for numerous international events held in Prague, including the 1978 European Championships.

Trkal worked as an international technical delegate and official at several major championships, including the 1988 Olympic Games and the World Championships in 1987, 1993 and 1997. Trkal was also a member of the IAAF Technical Commission from 1981 until 1999.