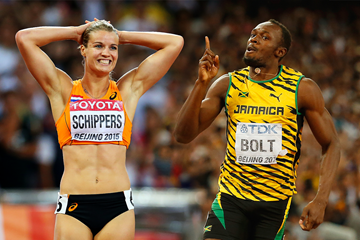 Usain Bolt and Dafne Schippers have amassed the most votes in the sprints category in the first round of voting for the 2015 IAAF World Athlete of the Year award.

Bolt successfully defended his 100m, 200m and 4x100m titles at the IAAF World Championships Beijing 2015. The Jamaican sprinter clocked a world-leading time of 19.55 when winning the 200m and he now owns 17 gold medals from senior global championships.

Schippers clocked a European record of 21.63 to win the 200m title in Beijing to go alongside the silver medal she took in the 100m where she set a Dutch record of 10.81. Earlier in the year, she set a world-leading mark of 7.05 over 60m.

The longlist will comprise the top-voted athletes in each category. The candidates from the other categories in the world athlete of the year voting will be announced over the coming days.

An international panel of 10 experts** will then select the finalists – three men and three women – the names of whom will be announced on 17 and 18 November.