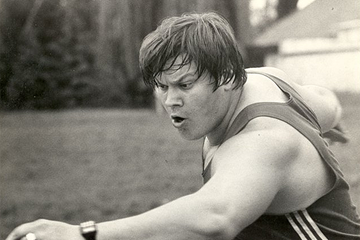 The IAAF is saddened to hear that former world discus record-holder Yuriy Dumchev died on Wednesday (10) at the age of 57 after suffering a cardiac arrest.

Born on 5 August 1958 in the Russian town of Rossosh, Dumchev took up athletics at the age of 16 while at boarding school in Moscow. He competed in both the shot put and discus before specialising in the latter.

His first breakthrough came at the 1977 European Junior Championships in Donetsk, where he won with a throw of 53.30m.

At the age of 21 he competed at the 1980 Olympics on home soil in Moscow and finished fifth. Two weeks later, he set a national under-23 record of 68.16m.

His progress continued and in 1983 he set a world record of 71.86m, adding 70 centimetres to the mark set five years earlier by Wolfgang Schmidt. But in one of the biggest shocks of the championships, he failed to make the final at the IAAF World Championships in Helsinki later that year.

Had the Soviet Union not boycotted the 1984 Olympics, Dumchev would have been among the medal favourites, but his victory later that year at the Friendship Games, an international event staged for the nations that boycotted the Olympics, provided some form of consolation. His winning throw of 66.70m was 10 centimetres farther than the winning distance at the 1984 Olympics.

Alongside his athletics career, Dumchev was a keen actor and starred in many Russian films, and also reached an international audience with occasional cameos in US productions.

He took a step back from athletics in 1986 and 1987 primarily to concentrate on his emerging acting career but returned to form in 1988. He threw 70.30m, the second-best mark in the world that year, but finished fourth at that year’s Olympics in Seoul, less than a metre shy of a medal.

He retired after the 1992 season and made a brief return in 1997. His best of 71.86m still stands as a national record and is a mark that only three men in history have surpassed.

Dumchev continued with his acting after retiring from athletics and in 1998 he became a member of the Guild of Russian Actors. However, he also remained involved in athletics, working as a throwing coach in Moscow.