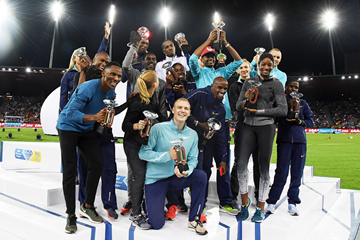 The eighth edition of the IAAF Diamond League series was the first in which the overall title in each event was determined solely by performance at one of the two final meetings in Zurich and Brussels.

As always, finals of the 32 events were shared by the latter two cities. But this year points gained during the previous 12 meetings, which earned athletes a place in their final, were not carried forward. That meant every athlete arrived at their respective final with an equal opportunity of winning.

Below is the second of our two-part 2017 IAAF Diamond League review.

His world-leading mark improved the previous meeting record of 43.66 set by Michael Johnson 21 years earlier, and was also an IAAF Diamond League record.

The javelin produced an almighty contest between past and present Olympic champions as a world-leading effort of 67.40m from the Czech Republic’s 2008 and 2012 gold medallist Barbora Spotakova was overhauled in the last round by 68.43m from Croatia’s reigning champion Sara Kolak. That was the second national record of the night for Kolak, who had earlier thrown 66.65m.

In the pole vault, Sam Kendricks continued unbeaten with a best of 5.93m to win on countback from Poland’s Pawel Wojciechowski, for whom the height was a personal best.

Jamaica’s Olympic champion Elaine Thompson maintained her 100m unbeaten run, clocking 10.94 ahead of Dafne Schippers of the Netherlands, who recorded 10.97.

Fred Kerley’s first professional race produced a personal best as the new US 400m champion was second in the 200m in 20.24 behind compatriot Ameer Webb’s 20.13.

Barbora Spotakova, beaten in Lausanne by her successor as Olympic javelin champion, Sara Kolak, got her own back. The 22-year-old Croatian thrower set meeting records of 66.79m and 67.83m before the 36-year-old world record-holder added her own, decisively – at 68.26m.

There was another meeting record in the long jump where world champion Tianna Bartoletta reached 7.01m to surpass the first-round 6.88m by Serbia’s Ivana Spanovic, who then withdrew.

In the high jump Maria Lasitskene cleared 2.00m for the 23rd time to earn her 20th consecutive victory.

Jamaica’s multiple world and Olympic champion sprinter Usain Bolt demonstrated once again, as he approached his career’s finish line, that he was still a winner as he took the 100m in a season’s best of 9.95.

“It was good, I’m going in the right direction, there’s still a lot of work to do,” Bolt said after a performance that still left him only joint seventh on the 2017 world list.

Caterine Ibarguen, the 33-year-old Colombian Olympic triple jump champion, produced a final effort of 14.68m to defeat 21-year-old Yulimar Rojas, who had beaten her in Rome the previous month.

World and Olympic 400m champion Wayde van Niekerk was pushed to the line by Botswana’s Isaac Makwala before earning victory in a meeting record of 43.73. Makwala clocked a season’s best of 43.84.

In the men’s javelin, Olympic champion Thomas Rohler threw 89.17m to beat fellow German Johannes Vetter, whose 94.44m effort the previous week had topped Rohler’s Doha season-opener of 93.90m and enabled him to move to second on the world all-time list behind Jan Zelezny.

Olympic 800m champion Caster Semenya responded to pressure as her lead was challenged in the home straight by Burundi’s Olympic silver medallist Francine Niyonsaba and US runner Ajee Wilson. The South African held on to win in 1:55.27 – a South African record, an IAAF Diamond League record, a meeting record and the fastest time run up to that point in the year.

The men’s 1500m saw Elijah Manangoi pass fellow Kenyan Timothy Cheruiyot in the final 50 metres before replacing him at the top of this year’s world list with a time of 3:28.80. Cheruiyot clocked a personal best of 3:29.10.

Mo Farah’s final track race on British soil finished appropriately as he won his 3000m in 7:38.64 – to huge and predictable acclaim.

“I never dreamed I would become a four-time Olympic champion and multiple world champion,” said the 34-year-old.

Mutaz Essa Barshim hadn’t trained since winning the world high jump title a week earlier – but it didn’t stop him making his first 2.40m clearance of the season, which was a meeting record.

Barshim thus became the first man in history to clear that height or higher for five consecutive years. And he walked off with the bar he had cleared as a souvenir.

The women’s 3000m saw Kenya’s world 5000m champion Hellen Obiri seize up 200 metres from the line before being passed by world indoor 1500m champion Sifan Hassan, who won in a Dutch record of 8:26.90, and Germany’s Konstanze Klosterhalfen, second in a German record of 8:29.89.

Jamaica’s Olympic 100m and 200m champion Elaine Thompson, who had missed a medal at the World Championships, won her 100m in 10.93.

In the women’s 400m, Bahrain’s world silver medallist Salwa Eid Naser won in 50.59 ahead of a field that included world champion Phyllis Francis.

A sell-out crowd of 25,000 at the Letzigrund Stadium witnessed the first of the two championship-style IAAF Diamond League finals. 17 newly-established world champions and 14 reigning Olympic champions were in winner-takes-all pursuit of Diamond Trophies – each with a top prize of US$50,000.

Mo Farah brought his track career to an end with a dramatic 5000m victory after a frantic finish that saw him take the Diamond Trophy by just 0.04 from Paul Chelimo of the United States and the Ethiopian who had prevented him winning a fourth consecutive world 5000m title earlier in the month, Muktar Edris.

Australia’s 30-year-old world champion Sally Pearson also earned her first Diamond Trophy, by a couple of thousandths of a second, after she and Sharika Nelvis were timed at 12.55.

Olympic 400m champion Shaunae Miller-Uibo secured her first Diamond Trophy in her supposed 'second' event in clocking 21.88 for the 200m – 0.03 inside her national record.

US pole vault world champion Sam Kendricks extended his 2017 unbeaten run to 11 after clearing 5.87m to take his first Diamond Trophy. World record-holder Renaud Lavillenie’s hopes of extending his unique run of winning every Diamond Trophy since the competition began in 2010 ended as he failed his opening height of 5.63m.

Timothy Cheruiyot, beaten to the world 1500m gold by training partner Elijah Manangoi, held off his Kenyan compatriot to win in 3:33.93.

Kazakhstan’s 2012 Olympic triple jump champion Olga Rypakova was without an international win in 2017, but on a rainy night she claimed the overall prize with 14.55m ahead of Venezuela’s world champion Yulimar Rojas, who managed 14.52m, and Colombia’s Olympic champion Caterine Ibarguen, who reached 14.48m.

Britain’s Chijindu Ujah took a first Diamond Trophy on a 100m photo-finish from Ben Youssef Meite as both clocked 9.97.

Isaac Makwala, whose medal ambitions over 200m and 400m at the World Championships had been undermined by illness, took the 400m Diamond Trophy in 43.95 after world silver medallist Stephen Gardiner of The Bahamas had slipped off his blocks.

The 400m hurdles also provided drama as Norway’s world champion Karsten Warholm lost his lead to the British Virgin Islands’ Kyron McMaster, who won in 48.07. Warholm was second in a national record of 48.22.

Caster Semenya successfully defended her 800m Diamond Trophy as she extended her unbeaten run to 20 meetings in 1:55.84.

There was more Diamond Trophy success for South Africa in the men's long jump with Luvo Manyonga and Ruswahl Samaai finishing 1-2. Manyonga, the world champion, won with an 8.49m leap to extend his unbeaten run to 10.

Jakub Vadlejch of the Czech Republic claimed the overall prize in the men's javelin with 88.50m.

Shaunae Miller-Uibo of The Bahamas added the 400m Diamond Trophy to the 200m version she had won a week earlier in Zurich as she clocked 49.46, the fastest time of 2017, in the second IAAF Diamond League final of the season at the King Baudoin Stadium.

Croatia’s Olympic discus champion Sandra Perkovic produced an effort of 68.82m that earned her a sixth consecutive Diamond Trophy, a record tally for a woman.

On a night when a major power cut in northern Brussels affected operations, world champion Faith Kipyegon and Sifan Hassan of the Netherlands lit up the AG Memorial Van Damme with an all-out surge around the final lap of the 1500m which eventually saw the Kenyan claim her first Diamond Trophy.

“At last I managed to win in 2017,” said Shubenkov. “Now I’ve got my first overall Diamond League title – maybe thanks to the system of one all-or-nothing race in the final. But it worked for me, so I’m very happy!”

The men’s shot put final took place a day before the main meeting at the Place de la Monnaie in Brussels – and Darrell Hill of the United States hit the jackpot with a last round meeting record of 22.44m, more than half a metre over his personal best, eclipsing the first-round effort of 22.37m by his compatriot Ryan Crouser, the Olympic champion.

Olympic champion Conseslus Kipruto claimed the prize in the men’s 3000m steeplechase as he edged past Soufiane El Bakkali to win his third Diamond Trophy in a time of 8:04.73.

Kenya’s world 5000m champion Hellen Obiri won her Diamond Trophy in 14:25.88 ahead of compatriot Caroline Kipkirui, who clocked a personal best of 14:27.55.

Olympic 400m hurdles champion Dalilah Muhammad held off a late challenge from the Czech Republic’s Zuzana Hejnova, world champion in 2013 and 2015, to win in 53.89.

Serbian long jumper Ivana Spanovic, who missed a medal at the World Championships, finished her season a winner thanks to a final effort of 6.70m.

Nijel Amos was another athlete frustrated in London who found a golden lining in Brussels as he won the men’s 800m in 1:44.53.