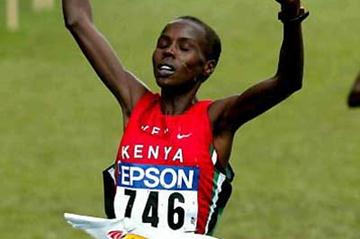 Edith Masai, by winning her third IAAF World Cross Country short course title 11 days short of her 37th birthday, prompted the question: what might she have achieved in her international running career had she started in earnest earlier than it did, just five years ago?

Masai’s rise in the time since she first won a bronze medal in the 4km race when the World Cross Country Championships were last staged in Belgium, at Ostend in 2001, has been mercurial.

The best victory yet

She has since won Commonwealth Games silver and the bronze at 5000 metres in Paris last year, and now three successive short course titles. The manner of her imperious performance here today must surely rank as her most impressive, as she delivered Kenya’s first individual title of the 2004 edition.

“But it was hard,” Masai admitted, clearly having found the muddy conditions tough. “It was the same in Ostend.”

Masai completed the gluey 4km course in 13:07, racing away over the final downhill stretch to win by two seconds from Tirunesh Dibaba, who thus matched her sister’s silver medal in the previous day’s long course event, while the bronze went to her team mate Teyiba Erkesso a further two seconds back, as they led Ethiopia to their fourth of the five team titles contested thus far.

Masai’s team mate, Isabella Ochichi, had set the pace over the harem scarem first lap, which was completed in 6min 25sec with a pack of 10 - five Kenyans and five Ethiopians - some six seconds ahead of Britain’s Helen Clitherhoe, Zahra Ouaziz, from Morocco, and the Russian, Olga Romanova.

"It's not getting any easier as I get older"

But as the leaders turned away from the grandstand to make their steady climb uphill, it was Masai who took charge. “I tried to shake off the Ethiopians several times but didn’t succeed,” she said.

“With 300m to go, I thought I had a chance to beat them in a sprint and I broke away.

“It is not getting any easier as I get older, after all, I am old enough to be the mother to some of the competitors in the race today, but at least I seem to be improving still,” said Masai, who will go into the record books as the oldest ever individual women’s World Cross Country champion.