Ayele Abshero debuts with a sizzling 2:04:23 win in Dubai (© Organisers)

Organisers of the TCS Amsterdam Marathon have lured Ayele Abshero to beat the course record of the IAAF Gold Label Road Race on 19 October.

Expectations are high of the 23-year-old Ethiopian runner, who has a personal best of 2:04:23. Two-time New York Marathon winner Marilson dos Santos will also run the classic distance. The consistent 37-year-old Brazilian has finished in the top 10 in 13 of the 14 marathons he has completed.

The highlight of Abshero's career was his 2012 victory in the marathon in Dubai, where he ran 2:04:23 on his debut at the distance. That performance ranks him eighth on the world all-time list of marks set on record-eligible courses.

Abshero has also twice finished in the top four at the London Marathon, both times running faster than 2:07.

This year’s Amsterdam Marathon won’t be Abshero’s first appearance in the Netherlands. He won the half marathon in Egmond Aan Zee in both 2011 and 2014. In 2008, when he was just 17, he won the Zevenheuvelenloop (Seven Hills Run) over 15km, and in 2011 he set a half marathon PB of 59:42 at the City Pier City loop.

The number of South American participants in this race has soared in recent years and Dos Santos, the South American record-holder over 5000m and 10,000m, will be one of 680 expected runners from Brazil lining up on 19 October.

For the past four years, the winning time in Amsterdam has been faster than 2:06. Wilson Chebet, winner in Amsterdam for the past three years, currently holds the course record of 2:05:36 from last year’s race. 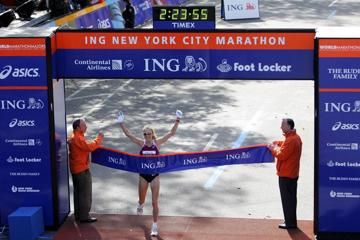