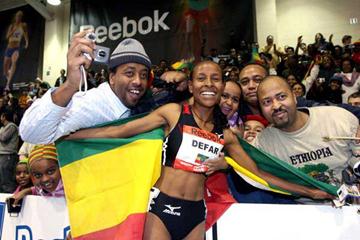 Defar and Lagat set to return to Boston

When Meseret Defar and Bernard Lagat compete at the New Balance Indoor Grand Prix in Boston on 7 February, both will be marking milestones in their careers at the IAAF Indoor Permit meeting.

Two-time Olympic champion Defar will be competing for the first time since the birth of her daughter in June. Her last race was at the 2013 Great North Run when she set a half-marathon PB of 1:06:09, but in Boston she will be competing at the other end of the distance spectrum when she lines up for the 2000m.

“It is perfect that I am running my first race since childbirth in Boston,” said the four-time world indoor 3000m champion. “I always feel so comfortable and welcome in the city and at the track, and of course I have not forgotten setting a world best there. I am eager to show my fans there that Meseret is back!”

Both Defar and Lagat will face strong competition. Returning in an attempt to improve on her runner-up finish at 2000m here last year will be 24-year-old Emma Coburn, who went on to break the US steeplechase record with 9:11.42.

Lagat will have to contend with 20-year-old  Hagos Gebrhiwet, the world 5000m silver medallist from Ethiopia who set a world junior indoor 3000m record of 7:32.87 at this meeting in 2013.