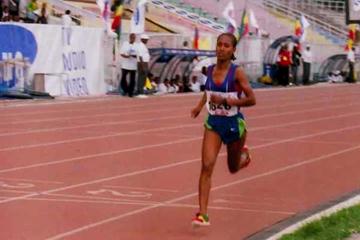 A fine display of front running by former World Cross Country champion Gelete Burka in the women’s 1500m and Ali Abdosh’s sprint finish in the men’s 5000m were the highlights of the fifth and final day of the 36th Ethiopian Athletics Championships (2 - 6 May 2007) in Addis Ababa on Sunday.

In the day’s other action, Defence club runner Roba Gari smashed his own Addis Ababa stadium record in the men’s 3000m steeplechase, while sprinters Wetere Gelelcha and Atkilt Wubshet won their third gold medals of these championships when helping their club Ethiopian Banks to the men’s and women’s 4X100m relay titles respectively.

With Kenenisa Bekele, Meseret Defar, and Tirunesh Dibaba absent from these championships, the spotlight was always going to fall on 21-year-old Burka, who chose to compete in the 1500m instead of her speciality 5000m.

Such was the expectation of the vociferous home crowd that the Addis Ababa stadium erupted into deafening cheers when her name was called by the announcer before the start of the race.

If the former World Junior Cross gold medallist was under any kind of pressure, she did not show it making a joke out of an impressive field that included specialist middle distance runners Mestawot Tadesse, the defending champion and winner of the 800m a day earlier, and the 2006 national 800m champion Berhane Hirpassa.

Burka opened up a gap of 20m on the chasing after just 200m of the race and cheered on by the crowd, set out to lower her own Addis Ababa stadium record time of 4:10.10. Tadesse, Hirpassa, and Asselefech Mergia (bronze medallist over the 5000m in these championships) all tried their best to catch up, but Burka was more than 100m ahead of them and very much of record schedule.

With 200m of the race left, Burka began to tire with obvious signs of exhaustion visible on her face. At the end, she crossed the line in 4:10.89, more than three seconds ahead of Meskerem Assefa in second with Mergia repeating her bronze medal performance from Friday to finish third.

“I was very exhausted, but the victory makes up for it,” she says. “It means a lot to me and a lot to my club.”

When Defence club Ali Abdosh, fifth in the 2006 World Cross short course and fifth in the African champs 5000m, lost out to Markos Genetti in last year’s 5000m final, he knew that he had planned his tactics wrong by leading too long in the race.

There was no repeat of last year’s tactical naivety this time around as the 22-year-old won his first ever national track title with a new strategy of waiting and pouncing.

Unlike last year, Abdosh was invisible running in the middle of a large leading group throughout the race. Maeregu Zewde, the 2004 World Cross bronze medallist, Mulugeta Wondimu, 10th over the 5000m at the 2004 Athens Olympics, and Demesew Tsega, all tried to lead the pack at various points in the race, but none of their courage seemed to bother the others as eight runners ran side-by-side at the bell.

Tsega and Abdosh were the first to move ahead of the rest with 300m to and run side-by-side until the latter launched a vicious kick 100m later to take victory in 14:04.30, ahead of Tsega with Defence club runner Tilahun Menashe beating the challenge of Zewde and Wondimu for bronze.

“I am slowly getting back to fitness and form,” said Abdosh. “Last year, I started well and finished fifth in Fukuoka. I ran only one Golden League meeting in Oslo and could not run as much as I wanted due to Amoeba and bacterial infection. I am feeling better this year. My next race will be in Hengelo where I plan to run over the 10000m just to taste myself.”

Ethiopian distance running star Haile Gebrselassie was also full of praise for Abdosh’s tactics and his superb finishing. “With that finishing, you can defeat anyone in a major championship,” he told Abdosh before awarding the three medallists in the race.

No steeple too hard for Gari

In the men’s 3000m Steeplechase, Roba Gari was in record breaking mood from the outset when he opened up a healthy lead over Nahom Mesfin, sixth in the 2006 World Junior Champs.

He showed no sign of slowing down throughout the seven-and-half lap race and clocked 8:31.48, more than seven seconds faster than the Addis Ababa stadium record he set two weeks ago in the Addis Ababa Municipal track championships.

“I could have lowered it further,” said Gari after the race. “Now I want to win the world championships qualification mark and hope to compete in Osaka.”

The sprint relays have a trend of public excitement in these championships and it was no exception as runners from Ethiopian Banks and Prisons Police renewed their rivalry.

At the end, Ethiopian Banks took a clean sweep of the 4x100m men’s and women’s relay victories anchored by Wetere Gelelcha and Atkilt Wubshet, who each won their third gold of the championships after taking victories in the 100m and 200m. The two runners, who were the only Ethiopian sprinters in the 2006 African champs, also took five gold medals between then in the ANOCA Zone V championships in Nairobi in February.