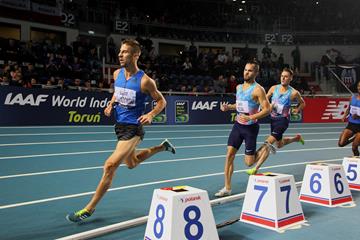 Lewandowski and Tuka take on Kszczot in Torun

World 1500m bronze medallist Marcin Lewandowski and world 800m silver medallist Amel Tuka will line up against Adam Kszczot in the 800m at the Orlen Copernicus Cup, part of the World Athletics Indoor Tour, in Torun on 8 February.

Lewandowski has finished second in the 1500m at the Copernicus Cup for the past three years, but this season he’ll step down to the 800m in a high-quality race that includes Tuka, Kszczot and Swedish record-holder Andreas Kramer.

Lewandowski, the 2015 European indoor champion over 800m, focused more on the longer event in 2019. After setting a Polish indoor record of 3:36.50 in Torun, he went on the break the national outdoor record twice, culminating with his 3:31.46 run at the World Championships in Doha to take the bronze medal.

As in previous years, Lewandowski will donate his appearance fee to a children's cancer charity.

Kszczot, whose participation in Torun was announced earlier this week, is the world indoor champion over 800m and a three-time European champion. His indoor best, 1:44.57, puts him seventh on the world indoor all-time list.

Kramer first broke the Swedish record in 2017 with 1:45.13 and then reduced it to 1:45.03 in 2018. He then equalled that mark to earn the silver medal at the European Championships in Berlin.