Sifan Hassan of the Netherlands won the 1500m in a national record and world-leading time of 3:57.00, with USA’s 2011 world champion Jenny Simpson second with a personal best of 3:57.22 that was 0.1 short of Mary Decker-Slaney’s national record set almost 31 years earlier.

Of the two favourites, Hellen Obiri and Sweden’s world champion Abeba Aregawi, the Kenyan did the better with third place in 3:58.89.

Pole vault world record-holder Renaud Lavillenie became the first athlete of the summer to secure a Diamond Trophy as he secured his fifth IAAF Diamond League win of the year on home soil with a single vault of 5.70m.

Croatia’s former world high jump champion Blanka Vlasic, whose career had stalled with illness and injury, got one of the biggest cheers of the night as she won with 2.00m ahead of Russia’s joint world indoor champion Maria Kuchina, who also cleared 2.00m, a personal best.

The 42,000 crowd greeted another French victory in the women’s long jump as Eloyse Lesueur managed a personal best of 6.98m to defeat three-time world champion Brittney Reese of the United States (6.87m).

There were world leads in the 100m hurdles and 110m hurdles, with 2008 Olympic champion Dawn Harper-Nelson clocking 12.44 in the former event, and – in a non-Diamond League race – Hansle Parchment taking 0.11 off his Jamaican record, with France’s Pascal Martinot-Lagarde second in a personal best of 13.05.

Dafne Schippers lit up a damp and cool Hampden Park stadium with two national records in the space of two hours.

The Dutch heptathlete-turned-sprinter won the women’s 200m in 22.34 – 0.01 inside her own record – ahead of Olympic champion Allyson Felix and Nigeria’s Diamond Race leader Blessing Okagbare, having won the earlier 100m B race in 11.03.

A huge lifetime best of 86.99m in the last round of the javelin secured a shock victory for Germany’s Thomas Rohler.

World 800m record-holder David Rudisha warmed up for the Commonwealth Games in the same city as he equalled the world-leading time of 1:43.34 set a week earlier by Kenyan compatriot Asbel Kiprop.

It was the 15th IAAF Diamond League win of the Olympic champion’s career and put him top of the Diamond Race ahead of Olympic silver medallist Nijel Amos.

Former world 100m champion Yohan Blake fell with a hamstring injury 30m from the end of a 100m won on the opening day by fellow Jamaican Nickel Ashmeade in 9.97.

Earlier, world and Olympic discus champion Sandra Perkovic – unbeaten in the IAAF Diamond League since 6 July 2012 – had that run ended by US thrower Gia Lewis-Smallwood, who won with a personal best of 67.59m. The Croatian, reportedly hampered by a back injury, reached 66.30m.

Silas Kiplagat produced the shock of the meeting as he outsprinted Asbel Kiprop, the fellow Kenyan who had been targeting Hicham El Guerrouj’s 16-year-old world 1500m record of 3:26.00, to win in 3:27.64 – making him the fourth fastest man in history.

Kiplagat’s mark was a world lead and an IAAF Diamond League record, trimming 0.08 off the time Kiprop had set in winning on the same track a year earlier.

David Rudisha bettered his world-leading mark in the 800m – a non-Diamond League event – but could still only place fifth in clocking 1:42.98 in a race where Olympic silver medallist Nijel Amos headed the season’s listings with 1:42.45 ahead of Pierre-Ambroise Bosse, who set a French record of 1:42.53.

Bosse’s was the first of two French records on the track, with Pascal Martinot-Lagarde winning the 110m hurdles in 12.95.

Bogdan Bondarenko cleared 2.40m to win a high jump involving six men who had cleared that height this season, including Mutaz Essa Barshim.

Genzebe Dibaba overcame the challenge of her Ethiopian compatriot Almaz Ayana to record a world-leading time of 14:28.88 in the first IAAF Diamond League women’s 5000m to be held in Monaco.

Renaud Lavillenie’s winning run of 22 pole vault competitions came to an unexpected end in the cold and damp of the1912 Olympic Stadium as he failed to clear a height.

Having earned his third European title in Zurich the previous week, France’s world record-holder saw his unbeaten season’s run falter as he entered the competition at 5.60m, with three rivals still in the competition, only to fail at all three attempts.

Taking full advantage of this momentous lapse was Konstantinos Filippidis, Greece’s world indoor champion, who won with 5.60m on countback.

Things soon went awry for another Olympic champion, Australia’s recently crowned Commonwealth champion Sally Pearson, as she was disqualified for false-starting in the 100m hurdles, which went to Queen Harrison in 12.66.

Tianna Bartoletta, who arrived with the top four women’s long jumps of 2014 to her credit, produced a final effort of 6.98m to overtake the wind-assisted second-round leap of 6.94m which seemed likely to earn France’s double European champion Eloyse Lesueur maximum points.

The Olympic 5000m and 10,000m champion’s effort was one of three world-leading performances at the Alexander Stadium, with Kenya’s Mercy Cherono clocking 9:11.49 in the women’s two miles and compatriot David Rudisha recording 1:13.71 for the 600m.

Mutaz Essa Barshim and Bogdan Bondarenko fought out their latest battle in the high jump, with the Qatari athlete prevailing on countback after both had cleared 2.38m, a stadium record.

Britain’s Lynsey Sharp gained revenge on world champion Eunice Sum in the women’s 800m, the Commonwealth Games silver medallist beating the woman who took gold in Glasgow with a late run in 1:59.14.

But Sharp’s fellow Scot Eilidh Child, the European 400m hurdles champion, had to give best to Kaliese Spencer, with the Jamaican winning in 53.80. Child was second in 54.89.

Caterine Ibarguen maintained her winning run in the triple jump with victory in 14.52m, while Valerie Adams, already Diamond Race winner in the shot put, extended her unbeaten run to 55 consecutive finals with 19.96m.

Tori Bowie’s season came to a staggering halt as she pulled up with a hamstring injury after 60 metres of a women’s 100m won in 11.22 by Jamaica’s Kerron Stewart. Allyson Felix had failed to make the final, finishing fourth in her heat in 11.30.

With half of the 32 Diamond Race winners to be confirmed in the first of the season’s IAAF Diamond League finals, in which double points were on offer, Veronica Campbell-Brown had a margin of two thousandths of a second in the 100m to thank for earning the $40,000 prize and four-carat Diamond trophy as one of the overall season’s victors.

Jamaica’s twice-Olympic 200m champion and Murielle Ahoure of the Ivory Coast clocked 11.04, but Campbell-Brown took the verdict by 11.032 to 11.034. Victory would have earned the Ivorian the spoils.

Jenny Simpson also took dramatic advantage of the high stakes as she held off a desperate challenge from US compatriot Shannon Rowbury to win the 1500m by 0.01 in 3:59.92, thus securing her place on the Diamond Race podium.

LaShawn Merritt was already out of reach in the 400m Diamond Race and secured his prize with victory in 44.36. Fellow US sprinter Dawn Harper Nelson confirmed her 100m hurdles Diamond Race title by winning in in 12.58, celebrating with cartwheels.

Germany’s 22-year-old Thomas Rohler, a disappointed 12th in the javelin at the European Championships held in the Letzigrund stadium a fortnight earlier, redeemed himself by winning with a personal best of 87.63m to take his Diamond Race. Trinidad and Tobago’s 21-year-old Olympic champion Keshorn Walcott was second with a national record of 85.77m.

Olympic triple jump champion Christian Taylor secured his Diamond Race win as a season’s best of 17.51m in the final round took him from third to first.

Olympic silver medallist Nijel Amos won overall supremacy in the 800m after winning in 1:43.77, and Kenya’s Caleb Ndiku earned overall honours in the 5000m through victory in 13:07.01.

Ivana Spanovic won the long jump with 6.80m, but the Diamond Race went to Tianna Bartoletta of the United States, second with 6.76m.

Croatia’s world and Olympic discus champion Sandra Perkovic was out of sight in the Diamond Race, but she rounded off with a win thanks to a last-round effort of 68.36m to overhaul Gia Lewis-Smallwood’s best of 67.32m.

Shot putter Reese Hoffa took the Diamond Race with a best of 21.88m and Maria Kuchina, Russia’s joint world indoor high jump champion, rounded the evening off by earning her place on the Diamond Race podium with victory in 2.00m.

It added a centimetre to his Asian record and the IAAF Diamond League record, establishing himself as the second-highest jumper ever behind Javier Sotomayor, whose 1993 world record stands at 2.45m.

With double points on offer for the finale, Barshim’s victory enabled him to clear his arch-rival Bogdan Bondarenko – winner of the previous three IAAF Diamond League meetings – and claim the Diamond Race by 20 points to 18.

Qatar’s 23-year-old world indoor champion required his final flourish after initial failures at 2.28m and 2.37m had given the initiative to Bondarenko, who had first-time clearances at 2.28m, 2.34m and 2.37m.

Including indoor marks, this competition brought the tally of 2.40m jumps in 2014 to 16. Before this year, never had two high jumpers cleared 2.40m in the same competition. In 2014 it happened four times.

Barshim’s winning leap was one of seven world-leading marks here. Renaud Lavillenie – already the only athlete to have won all five Diamond Races in succession – provided another with a pole vault of 5.93m.

Kenya’s world champion Eunice Sum, unassailable in the Diamond Race 800m, was third in the final, won in 1:58.84 by Brenda Martinez.

French sprint hurdler Pascal Martinot-Lagarde was another with an unbeatable Diamond Race total – he finished with victory in 13.08 – as was Valerie Adams. New Zealand’s world and Olympic champion secured her 56th consecutive shot put victory and fourth successive Diamond Race success with a meeting record of 20.59m.

Another of the world-leading marks came in the men’s 100m as USA’s Justin Gatlin secured the Diamond Race in a personal best of 9.77 before completing the fastest one-day double by winning the non-IAAF Diamond League 200m in 19.71. 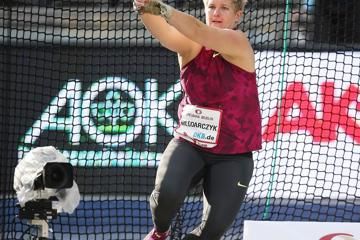 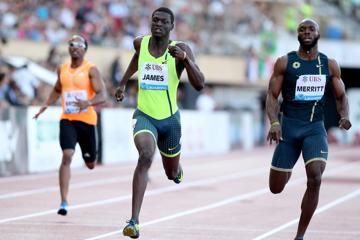