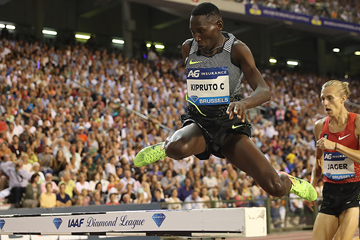 Conseslus Kipruto and Evan Jager will return to the Prefontaine Classic on 25-26 May to renew their steeplechase rivalry at the IAAF Diamond League meeting in Eugene.

The field includes six of the top seven finishers from last year’s World Championships and every IAAF Diamond Trophy winner since its 2010 inception.

World, Olympic and Commonwealth champion Kipruto has won medals at every international championship he has contested, dating back to the 2011 World U18 Championships. The three-time Diamond Trophy winner was only 18 when he won his first Pre Classic race in 2013.

Olympic silver medallist Jager has been North America’s best steeplechaser since first taking up the event in 2012. The world bronze medallist recorded the fastest time in the world last year with 8:01.29, his fastest time since setting his third North American record of 8:00.45 in 2015.

Jairus Birech won the first of his two Diamond League trophies as a 21-year-old in 2014. Now 25, the Kenyan has twice broken the eight-minute barrier and is the field’s second fastest at 7:58.41.

Paul Kipsiele Koech is history’s third-fastest ever at 7:54.31 and no one has cracked the eight-minute barrier more times than his nine such clockings. After a season of focusing on the marathon, the 36-year-old is returning to the steeplechase, the event in which he won the Diamond League’s first three trophies.

Four Kenyans in the field will be making their US debut: Commonwealth silver medallist Abraham Kibiwott, world U20 champion Amos Kirui, Benjamin Kigen and Nicholas Bett.

Others in the field include USA’s Andy Bayer, Canadian record-holder Matt Hughes, and Ethiopian teenagers Tesfaye Deriba and Getnet Wale.