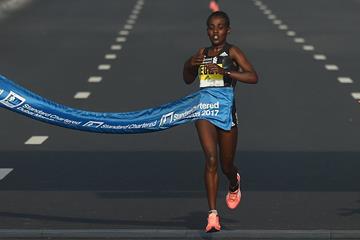 A powerful field of elite athletes will come together for the Standard Chartered Dubai Marathon, a World Athletics Gold Label road race, on 24 January.

Ethiopian record-holder Worknesh Degefa will start as red-hot favourite thanks to an enviable record running the flat and fast streets of Dubai.

In 2017, the diminutive 29-year-old stunned an experienced field by winning in Dubai on what was her marathon debut. A year later, she broke the 2:20 mark for the first time but had to settle for fourth, while last year saw her finish second in Dubai in a remarkable time of 2:17:41. Not only did Degefa smash the Ethiopian record by 15 seconds, she also set what is now the fifth fastest time in history.

Kebede Megertu Alemu made a big step up in the second half of 2018. She chopped eight minutes from her half marathon PB with 1:06:43 in Copenhagen and reduced her marathon best to 2:21:10 to finish second in Frankfurt.

With a PB of 2:04:40, 25-year-old Deksisa is the fastest athlete on the start list. Despite his relatively young age, the talented Ethiopian has built up plenty of experience at the marathon distance after a brief track career.

At the age of just 20, he won the 2014 San Diego Half Marathon with a personal best of 1:00:12, then two years later he moved up to the marathon and ran an impressive 2:06:22 debut in Rotterdam to finish second.

Since then he has fully focused on the 42.195km distance and claimed his first marathon victory in Mumbai in 2018 before winning again in Hamburg a few months later. It proved to be his best year so far as he ended it with a 2:04:40 PB to finish third in Amsterdam. His lifetime best is just one minute outside the Dubai course record set in 2019 by Getaneh Molla.

Deksisa’s compatriot Tura is another of Ethiopia’s crop of rising stars who made an impressive marathon debut with a solid second place in 2:09:26 in Seoul in 2017.

Still just 22, Tura enjoyed his best day at the 2018 Standard Chartered Dubai Marathon when he took full advantage of the renowned fast course to carve a big slice off his personal best, improving by four minutes to run 2:04:44 for seventh. The young Ethiopian has also sealed marathon wins in Milan and Shanghai, while setting a half marathon personal best of 59:17 in Buenos Aires in August.