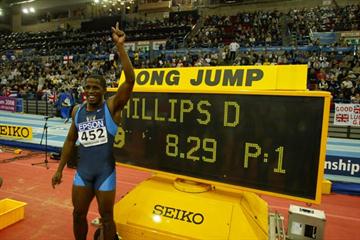 The men’s Long Jump final of these 9th IAAF World Indoor Championships may well be one which recorded a surprisingly high number of fouls, the red flag being raised 25 times during the contest but it will most likely be remembered for being an exceptional battle of nerves.

The real action started when the athletes took their fourth attempt by which time Dwight Phillips (USA) was in the lead with a second attempt effort of 8.23m followed by Spain’s Yago Lamela (8.13m) and Cuba’s Luis Felipe Meliz (8.01m).

It was then that the other American in this final, Miguel Pate finally got into the groove and after three fouls leapt out to 8.04m while Lamela improved his best mark to 8.20m.

Just like in all the good thrillers where the best comes at the end, all three medallists of today saved their best for last. First it was Pate whose 8.21 metre landing was 2 centimetres short for gold but still good for silver. Then, Lamela counter attacked with a superb 8.28 metre effort. But the last word today went to Phillips whose last jump of 8.29m, if far from technically perfect, was enough for the title.

“I knew it was a good jump. As soon as I landed I thought it was around 8.30s or something. But I messed it up. The landing was premature; I didn’t stay up in the air long enough. A couple of tenths of a second more and it would have been the one. I think I lost at least 20 centimetres.”

But there was certainly no time and no need for disappointment as Phillips literally sprinted into a memorable lap of honour as soon as the score board flashed the result.

“I am very excited. I am happy I have this gold medal with me now. I knew I could still put a good jump together as my best jump is usually my last and I am very strong under pressure.”

Although he was the only American who made the Sydney Olympic Long Jump final, Phillips was never spotted as the candidate for becoming the next big long jumper in the USA.

“It is good that there are a lot of good jumpers in the US again. It’s great pressure but it can only be good. I feel like I have been overshadowed in the past because I hadn’t won anything major yet but now I know I am going to get a lot of attention.”

Things weren’t totally perfect for Phillips here in Birmingham though starting with yesterday’s qualification round.

“I was extremely cold yesterday. I hadn’t warmed up properly and didn’t manage to jump the way I would have liked to. After the preliminaries I warmed down properly and went back to the hotel. Last night I slept very well, I didn’t feel nervous at all.”

Today Phillips who was in the lead after the third round and therefore certain that he would be the last one to jump in case he might need to respond to his opponents, didn’t take his fifth jump running all the way through the end of the sand pit.

“I felt a slight cramp in my calf during my runway and decided not to take any risks. I didn’t want to injury myself in case someone passed me with his last attempt.”

The 25-year old couldn’t have been more right and just a few minutes after, Lamela managed to put together his best jump of the day and landed five centimetres clear of Phillips’ best mark so far for what ended up being a very temporary leadership.

“I knew Lamela was able to pass me. He is a great competitor.”

But this time Phillips had enough left in his tank.

“I do feel like a winner now. I am very proud I am the first American (long jumper) to win a World Indoor championship since 6 or 8 years now.”

And Phillips did study his statistics but didn’t have it quite right for the Americans hadn’t won a Long Jump gold medal in these championships since Larry Myricks back in 1989, 14 years ago!

Despite a season’s best of 8.43m, Lamela didn’t manage to capitalise a win today and explained what lied behind.

“I felt quite a strong pain in my left hamstring in the second round. I tried to give it all in the last jump and I did but that wasn’t enough. What is worse today is not losing the gold or even losing it at the very last attempt but it’s the injury.”

Both Phillips and Lamela expressed respectful words concerning Pedroso and regretted his absence.

“It is a pity he wasn’t competing here. Hopefully my next big achievement will be beating Pedroso in what I see like a bright future for myself,” concluded a delighted Phillips.

Miguel Pate who had defeated Phillips in the US National trials two weeks ago didn’t hide his disappointment. “I’ve just had a very bad day today, but if this is what I can do on a bad day just imagine how well I can jump on a good day!”