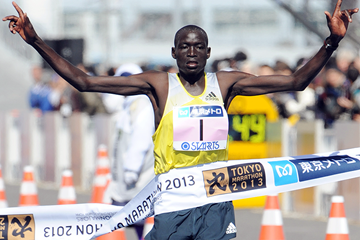 World record-holder Dennis Kimetto and defending champion Patrick Makau are among the top athletes set to compete at the Fukuoka Marathon, an IAAF Gold Label Road Race, on 6 December.

It will be Kimetto’s first marathon since withdrawing from the IAAF World Championships in Beijing two months ago. The Kenyan, who last year set a world record of 2:02:57 in Berlin, will be keen to end his year on a high, having finished third at the London Marathon earlier this year.

Japan-based Kenyans Martin Mathathi and Joseph Gitau are also former Fukuoka winners. 2007 world 10,000m bronze medallist Mathathi will return to the scene of his 2013 victory when he won in 2:07:16 on his debut at the distance. Gitau also set his PB when winning in Fukuoka, clocking 2:06:58 in 2012.

Other Kenyans in the field include 2:04:53 man Bernard Koech and Benjamin Ngadu.

Getu Feleke is the sole elite Ethiopian entrant. The former Amsterdam and Vienna winner set his PB of 2:04:50 in 2012 when finishing second in Rotterdam. This will be the 28-year-old’s first race in Japan.

World half marathon silver medallist Samuel Tsegay is one of two strong Eritrean athletes in the field. The 2:07:28 runner will be joined by compatriot Amanuel Mesel, who finished ninth in the marathon at this year’s World Championships.

Nine-time European cross-country champion Serhiy Lebid will be competing in Fukuoka for the first time. Despite turning 40 in July, he clocked a respectable 2:10:21 at this year’s London Marathon and set a PB of 2:08:32 last year. His sole marathon victory to date, his 2014 Nagano win, came on Japanese soil.

Other internationals in the field include Mongolian record-holder Ser-Od Bat-Ochir, who finished third in Fukuoka last year, Brazil’s Paulo Paula, a top-10 finisher at the 2012 Olympics and 2013 World Championships, and Canadian Olympian Dylan Wykes.

Prolific racer Yuki Kawauchi leads the Japanese entries. The 28-year-old has contested the Fukuoka Marathon on five previous occasions, his best result being a third-place finish in 2013 in 2:09:05.