It was an announcement the sporting world was hoping would come. Haile Gebrselassie, the World record holder in the Marathon, said today that he has reconsidered his decision to hang up his spikes.

"After a few days (in) the countryside I could take some decisions," the two-time Olympic 10,000m champion said in his Twitter feed. "Running is in my blood and I decided to continue competing."

The Ethiopian's initial announcement to retire came at an impromptu and emotional press conference within hours of his outing at the ING New York City Marathon on 7 November after a knee injury forced him out of the race after the 16th mile.

"My announcement in New York was my first reaction after a disappointing race," said Gebrselassie, who has set 27 World records and World bests during his legendary career. “When my knee is better again I will start focusing on my next race.”

"I've just met with Haile and after careful consideration he has decided to continue his career,” Hermens said. "Haile was in a very emotional state when making the decision so quickly after the race. Now after speaking to his family and close friends he wants to continue.”

“Coming back to Ethiopia, he was overloaded with heartwarming reactions from all over the world,” Hermens said. “Many people, also close to Haile, asked him to come back on his decision. When he made his emotional decision, he did not foresee the impact that it would have for his people and the youth in Ethiopia.”

"He now realises that he cannot walk away and say goodbye to the sport which is his life, in this way,” Hermens said. “In New York he was really down, feeling he had let down the organisers and all of the people around the world who support him.”

"Haile at the time felt: 'At 37 why do I have to work so hard day in and day out?' But deep down in his heart he knows he will always run. It is in his blood. One day he realises he will have to stop but for the moment doesn't know when. He knows it is very important for the people of Ethiopia where he was given a great reception with pleas to continue when getting back home.”

Hermens said Gebrselassie's plans are not set in concrete but expects him to now concentrate primarily on winning the 2012 Olympic Games Marathon title in London while his next appearance over the distance is currently scheduled to be in Tokyo on 27 February.

“I want to thank everybody who supported me last week and gave me trust that I could still continue my career and that I can continue my road to London 2012," Gebselassie said. "Running is in my blood and now my mind is clear again I can continue competing.” 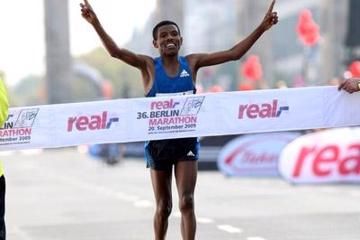