Joining fellow world champion Nethaneel Mitchell-Blake in competing at the Emirates Arena, Gemili will hope to create more memorable moments in Glasgow following his double silver medal winning exploits at the 2014 Commonwealth Games. Ujah meanwhile, the IAAF Diamond League champion over 100m this year, will be making his first ever race appearance in Scotland. The three, along with teammate Daniel Talbot, joined forces to win the 4x100m relay world title in 37.47, a European record.

“The Müller Indoor Grand Prix Glasgow is the event everyone wants to be at and do well at," Gemili said. "From my experiences of competing in Scotland in 2014 I know that the crowds will do everything to get behind you, and I’m sure that being up against some of the best in the world will drive me on to perform well.”

“With such a big year ahead," Gemili added, "the Müller Indoor Grand Prix Glasgow provides us with an opportunity to get in some vital race practice before moving on to the likes of the IAAF World Indoor Championships and the 2018 Commonwealth Games in the near future.”

“I can’t wait to compete for the first time in Scotland," said Ujah, whose 6.53 lifetime best dates back to February 2015.

Chijindu Ujah in the 60m at the Muller Indoor Grand Prix

“Racing indoors is always such a great experience – there is absolutely no room for mistakes so you have to be on your game to come out with the result you want, but I’ll use the atmosphere and the thought of ‘I’m up against the world’s best athletes here’ as motivation on February 25.”

“The guys captured the attention of the world in London this summer with their performance, so to have three of the four world champions on the start line for what will be some incredible 60m races is a real treat for the Scottish crowd," said British Athletics’ Major Event Director Cherry Alexander, winner of the Women in Athletics Award last month at the IAAF Athletics Awards 2017.

As the last meeting on the 2018 World Indoor Tour, Glasgow will present the final opportunity for athletes who haven’t otherwise qualified to receive wild card entry to the IAAF World Indoor Championships Birmingham 2018 which get underway the following weekend.

The Müller Indoor Grand Prix returns to Scotland having been held in Glasgow for the first time in 2016 as the city alternates hosting with Birmingham up to 2020. 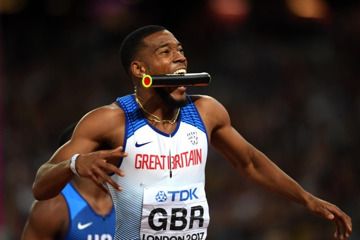