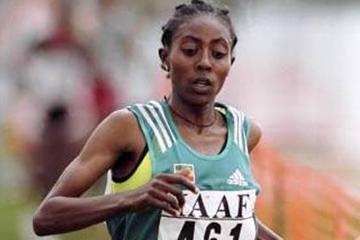 Gete Wami of Ethiopia and Richard Limo of Kenya took the honours in the 9th ASLK Cross Cup in Belgium, the first stage of the 1998/99 IAAF World Cross Challenge this afternoon.

Gete Wami, the diminutive Ethiopian, left the rest of the field stuck in the mud, and left her closest opponent, the young Finn, Annemari Sandell some eight seconds behind. The newly crowned European Champion from England, Paula Radcliffe, slipped through the mud to fourth place. "I wore long spikes, but I was just unable to get a grip", she declared after the race.

Wami, led practically from the gun to the tape on this traditionally testing course, and showed that she will be a force to reckon with at the 27th IAAF World Cross Country Championships, next March 27th – 28th in Belfast.

The men’s race saw a very close finish, with Richard Limo snatching victory in the last 30 metres. The young Limo, runner-up at last season’s IAAF World Junior Cross Country Championships ploughed through the mud, and stayed in contention throughout the race, never letting his countryman, World Half Marathon Champion, Paul Koech, out of his sight.

The fearless Limo surged past Haylu Mekonen and Paul Koech with the finish line in view. The first three athletes finished within three seconds of each other.

The European Champion, Sergey Lebid, from Ukraine, was never in the leading pack, finishing a distant 34th, over 2 minutes behind the Kenyan winner. Wilson Boit Kipketer, the reigning 3000m Steeplechase World Champion, also had a rough time in the mud, finishing right behind Lebid, in 35th position.

On the other hand, the 1997 European champion, Carsten Jorgensen was the first European ahead of some excellent cross-country specialists, showing his ability in tough conditions. He could be one to watch in Belfast next March!

The next stop of the IAAF World Cross Challenge will be Durham, England, next January 2nd.

Jane Boulter in Brussels for the IAAF