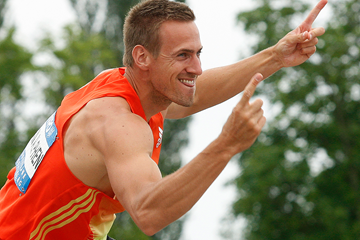 Belgian record-holders Hans van Alphen and Nafissatou Thiam will return to the Hypo-Meeting in Gotzis, the site of their PBs, to take on some of the best all-round athletes in the world at the IAAF Combined Events Challenge meeting on 30-31 May.

Van Alphen is a former winner in the Austrian city, having triumphed in 2012 with a national record of 8519. He went on to finish fourth at the Olympic Games later that year, but missed most of 2013 and 2014 through injury.

Fellow Belgian decathlete Niels Pittomvils will be competing in Gotzis for the first time. The 22-year-old has a PB of exactly 8000.

World junior champion Jiri Sykora will also be making his Hypo-Meeting debut. The 20-year-old Czech decathlete set a PB of 7927 in the senior decathlon last year.

Following the withdrawal of Dominik Distelberger, who has had to undergo shoulder surgery, namesake Dominik Siedlaczek will represent the host nation. The Austrian’s PB of 7430 was set in Gotzis 12 months ago.

Thiam, the European indoor silver medallist, is the latest addition to the heptathlon field. The European bronze medallist has improved significantly over the past few years and has twice broken the Belgian record, doing so most recently in Gotzis last year with a score of 6508.

Eliska Klucinova finished just one place behind Thiam at this year’s European Indoor Championships, setting a Czech pentathlon record of 4687. She also holds the outdoor national heptathlon record with 6460. This will be her fifth appearance in Gotzis with her highest finish to date being eighth.

There will also be two Austrian athletes in the heptathlon field. Ivona Dadic showed much promise as a junior, setting a PB of 5959 in Gotzis in 2012 and then coming with 24 points of that mark at the 2012 Olympics. Her last heptathlon was in 2013, so her appearance in Gotzis this year will be something of a comeback.

Compatriot Verena Preiner will be making her Hypo-Meeting debut. Since finishing ninth at last year’s IAAF World Junior Championships with a PB of 5530, the 20-year-old has showed much improved form during the 2015 indoor season.