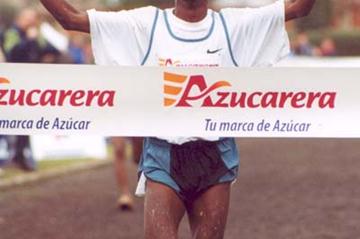 The race was held in gruelling conditions due to the heavy rains on the days prior to the competition and the day’s several earlier races had made the course even more of a quagmire by the time the main event got underway. As usual the African armada took the lead from the start and only seven athletes remained in the leading group going through the 2nd kilometre: Kamathi, Sihine, Zerisenay, Zimbabwe’s Nwgeske, Portugal’s Henriques and Spaniards Garcia and the surprise 26-year-old Juan Carlos de la Ossa who, having been hampered by a series of injuries in recent years, finally managed a promising 6th place last week at the Europeans in Medulin.

Soon afterwards Nwgeske and Henriques lost ground and before the halfway point the African trio broke away from the Spaniards so the race became an African affair with Garcia and de la Ossa daring to intrude on the private party by staying in close attendance. The first time that the entertained crowd could see Kamathi in trouble was with 3 kilometres left as Sihine and Zerisenay tried to pull away from the Kenyan and built a 10m gap before Kamathi manage to catch back on them.

As the leading trio entered the final lap the Ethiopian stepped up the pace dramatically and soon got a 20m advantage over Zerisenay, himself 30m up on a tiring Kamathi who was not capable of matching his winning performances in Soria y Llodio earlier in the Cross Country season. In the final mile Sihine was in a class of his own (recording 6:13 for the final lap, the previous ones have been run in 6:26, 6:27 and 6:28) and kept easily the gap he had courageously built. Henriques came through strongly in the second half of the race and overtook de la Ossa in the final lap to finish a fine 4th, over 100m clear of Garcia, 6th.

“Last season I was still a junior so it’s a big success for me winning today against such a strong field,” declared Sihine who has an excellent 27:26.12 at 10,000m and seems to follow in Gebrselassie and Bekele’s footsteps. After his 3rd spot Kamathi said: “I am in good form, but this circuit didn’t suit me at all. I will be running next 6 January in Campaccio (Italy)”.

In the women’s race Ayabei Jepkorir was a decisive winner in the 6350m course. Defying the muddy conditions the 23-year-old Kenyan went to the front from the gun tracked by her compatriot Viola Kibiwot, Turkey’s Elvan Abeylegesse and Portugal’s Monica Rosa tough the latter soon dropped from the lead. Jepkorir’s intentions were clear and when entering the 2nd kilometre she pulled away and by halfway she already had a lead of 12 seconds. Meanwhile European bronze medallist Abeylegesse shook off Kibiwott with ease but never threatened Jepkorir’s victory.

There were no remarkable changes in the remaining laps with Jepkorir, who finished 16th in the long race at the World Championships in Dublin last spring, strengthening her leadership and crossing the finish line 24 seconds ahead of Ethiopian-born Abeylegesse while twice World Junior Cross Country champion Viola Kibiwot came third another 23 seconds adrift. Among the Europeans, the strongest was Spain’s Iris Fuentes-Pila, a 4:04.25 1500m specialist and finalist at last summer’s Europeans championships.