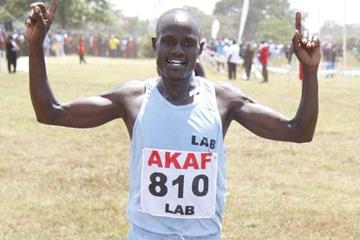 Evergreen Mark Kiptoo made a roaring return to the centre of the podium in the men’s senior race as Daegu Worlds marathon bronze winner scaled the heights in the women’s event during the annual Kenya Defence Force Cross Country Championships on Saturday (21).

The showdown took place at the relatively flat 81 Tank Battalion base in Lanet, Nakuru, the headquarters of the Kenyan Rift Valley where Kiptoo reclaimed the title he last won in 2010.

Cherop, who was the bronze winner last year, stamped her superiority in the women’s race to finally bag her first Forces Cross title as she shapes up for a stab at making her country’s final London Olympics marathon squad.

Competitors had to contend with racing against strong winds which coupled with a number of artificial barriers erected intermittently at the course, provided the stiff challenge.

Having begun his career at the ripe ‘old age’ of 29 six years ago, Mark Kiptoo who turns 35 in June, simply does not know when to slow down as he completed a commanding victory in the men’s senior race.

Having faded out of the picture last year in the defence of the Forces title, Kiptoo returned to the event rejuvenated and proceeded to restore the order as veterans swept the floor with their younger challengers.

2010 World Cross champion, Joseph Ebuya, who paled under the heat in Nanyuki last year returned to make amends with another seasoned old guard in Forces, the steeplechaser turned road racer, Linus Chumba also coming as a strong bet for victory on the back of three podium finishes in the just concluded KCB/AK National Cross Country Series.

Moncton World Juniors silver winner, John Chepkwony, who upset the cart with victory, last year, was also in for a defence but everyone forgot Kiptoo (seventh Amman World Cross) was on the scene-determined as ever.

For the second year in a row, Ebuya, 24, who announced his return to form with a brilliant win over a top field at the 58th Cross Internacional Zornotza in Amorebieta, Spain (January 8) was scorched by domestic competition as he fell of the lead before sliding for a 24th finish.

World Cross senior bronze winner, Vincent Kiprop was also in the picture but it was left to Kiptoo to command the headlines when he tore away from William Chebon, another seasoned performer at the AK series in the last kilometre to deliver a 36:20 victory over the latter who took silver in 36:25.

“I have trained well and I knew I would finish in the first ten positions here and winning it did not come as a surprise to me. My wish is to be selected in the national team for Africa Cross-country Championships this year,” Kiptoo said after crossing the finish line in triumph.

“To be honest, he surprised us with his performance today. In fact, the veteran runners in this race exceeded our expectations,” Major Paul Koech, the retired 1998 World Half Marathon champion now a top sports official at the Defence Forces remarked.

Sharon Cherop received a shot in the arm when she was named among the six probables for the London 2012 Olympics as reward for her consistency in the ultimate distance race.

Here, she completed a thrilling last-gasp sprint victory from her charging rivals as the leaders who shook off the challenge of perennial top performers at the Defence Forces meet with half of the race gone.

Defending champion, Linet Chepkurui was missing in action leaving a chasm to be filled at the centre of the rostrum.

Iness Chenonge, the Commonwealth 5000m bronze winner, who won the title in 2010 before ceding it to Chepkurui last year was one of the pre-race alongside Commonwealth 10,000m silver winner, Doris Changeiywo, a fourth finisher at Edinburgh World Cross and reigning World Military Games titleholder.

Also in the hunt were Peninah Arusei, fourth in the last two editions as well as rising Forces talent and Daegu 1500m finalist and national champion, Hellen Obiri and former World Junior 3000m champion, Veronica Nyaruai who is on a comeback trail to the apex of distance running.

From the gun and at the end of the first 2km, the top bills collected en masse at the front with road race specialist, Gladys Cherono and Jemimah Chelagat joining the leading party.

At the bell Sherop, Obiri and Chelagat were separated by few paces as Nyaruai and Changeiywo fell further adrift and at the last stretch, the winner displayed the finishing ability associated with track runners when she sped off for the tape.

Her spirited charged saw her arrive at the finish in 27:26 with the hard chasing Obiri enhancing her bludgeoning reputation among the Forces ranks when she came home two seconds in arrears.

She had to fend off another determined dash to the tape by Chelagat who took third in 27:30 to round the close podium finish with Nyaruai (27:55) and Changeiywo (28:33) finishing in that order for fourth and fifth.

“My focus is to prepare well so that I can be considered for the London Olympics when the final squad is named in April. If selected, I promise to fight for my country,” Cherop said.

In the road races that are held alongside the cross event, civilians dominated with Lawi Kiplagat topping the men’s 15km event in 45:13.9 ahead of Daniel Kemei (45:15.2) and Bernard Mureithi (45:24.4) completing the podium.