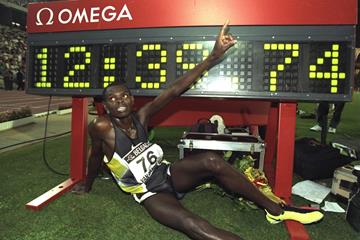 The indoor season and probably later the outdoor season - look set to be the stage for a series of record-snatching skirmishes between Kenya's Daniel Komen and Ethiopia's Haile Gebrselassie.

Last year, in Brussels, Komen and Tergat wiped Gebrselassie's 5000m and 10,000m records off the books in a single meeting and last Friday,

Gebrselassie had only set a new mark of 7:26.14 himself in the 3000m on 25 January in Karlsruhe and Komen's 7:24.90 in Budapest smashed any hopes Gebrselassie may have had of that record standing for very long.

Now Komen has his sights set on the indoors 5000m mark, currently owned by Gebrselassie with 12:59.04. Komen will be taking a shot at the record in the Globen Gala meeting in Stockholm on 19 February, which was where Gebrselassie set his mark last year.

Gebrselassie had a second go at the 1500m indoors record on Sunday in Ghent, but was over two seconds off the existing record of 3:31.18 set by Morocco's Hicham El Guerrouj in Stuttgart last year.

His next record attempt will be at the 11 year old 2000m indoor mark of Eamonn Coghlan, which he will be attacking in Birmingham next week and he will then go on to Stockholm to attempt to recover the 3000m record.