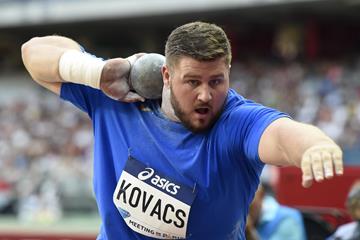 Six months after engaging in the finest shot put competition ever, world champion Joe Kovacs and world silver medallist Ryan Crouser will once again go head-to-head in Doha in the opening meeting of the Wanda Diamond League on 17 April at the Qatar Sports Club.

Kovacs, also world champion in Beijing 2015 and runner up in London 2017, is an Olympic silver medalist with a lifetime best of 22.91m.

Crouser, who won the Doha Diamond League shot put in 2019, is defending Olympic champion with a lifetime best of 22.90m.

The American pair were separated by only one centimetre at the 2019 World Athletics Championships in Doha in an extraordinary final which produced three of the seven best throws ever.

"Last year’s World Athletics Championships final was unbelievable, and unforgettable," Kovacs said. "The depth of competition was incredible, and I hope that we can continue that momentum through 2020.

“I’m excited to be opening my Wanda Diamond League season in Doha, especially alongside Ryan. With such a strong group of athletes we can really motivate one another in this Olympic year."

"I finished my year off on a high with 22.90m at the World Championships and I hope that I can build on that in the early part of the summer season, especially after a solid opener of 22.60m at the US Indoors," Crouser said. That indoor performance was just six centimetres shy of the world indoor record set in 1989, and elevated Crouser to the No. 2 position on the all-time indoor list.

“It’s important to build confidence and consistency at this time of year and I’m looking forward to going head-to-head with Joe in Doha. Similar to what’s happening in the pole vault this year, I’m sure we can bring the best out of one another.”