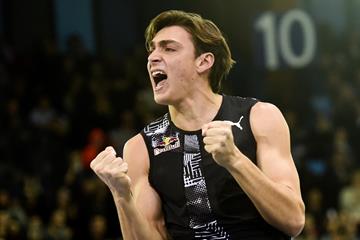 Fresh from breaking the pole vault world record in Glasgow just two weeks ago, 20-year-old superstar Armand Duplantis will compete at the Müller Anniversary Games at the London Stadium, part of the 2020 Wanda Diamond League, on 4-5 July.

One of the biggest young stars in world athletics, Duplantis’ rise to prominence has come on the back of a number of major medal wins and record-breaking feats over the course of the last few years.

Most recently, Duplantis historically revised the pole vault world record twice in the space of one week, first with a clearance at 6.17m in Torun, Poland on 8 February before then going 1cm better at the Müller Indoor Grand Prix Glasgow with 6.18m on 15 February.

During his breakthrough as a senior athlete, Duplantis backed up becoming the youngest world finalist for some 34 years at the 2017 World Championships in London – his last outing in the British capital - with European gold in 2018, the winning height a hugely notable one given the mark of 6.05m saw him set a huge personal best as well as revise his own under-20 world record.

World silver followed last October in Doha following a gripping shoot-out for a first global senior gold. Now with the world record his own, Duplantis is targeting an eye-catching performance in London this July as part of his preparation for a debut Olympic Games come Tokyo 2020.

“I’m hugely excited to be heading back to the UK to compete at the Müller Anniversary Games this summer,” Duplantis said. “The memories I have of vaulting in the UK – from competing at my first world championships in front of tens of thousands of people to breaking the world record in Glasgow a few weeks ago – are unforgettable, so to have another opportunity to return to the UK is huge for me.”

“Both of my previous performances in London and Glasgow owed so much to the support of the British crowd, and I’ll definitely be looking to feed off that support and produce an amazing performance in London come July.”