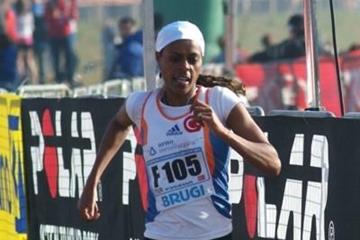 Lamdassem and Bekele are triumphant in the Cinque Mulini

The leading group was formed with 7:13 on the clock by Pascal Sarwatt for Czech club Ak Kromeriz, El Kalay, former European Junior and Under 23 XC champion Andrea Lalli, Gabriele De Nard and Yuri Floriani  (all from Italy). Sarwatt was the first to take the initiative with 16:30 but he was soon caught up by the chasing group led by De Nard, Lamdassem, Eduardo Mbengani from Portugal.

At around 20:50 into the race, during the fourth lap, El Kalay forced the pace inside the famous Mulino Meraviglia. Thanks to El Kalay’s initiative the race really hotted-up with only four men remaining to contend for the win. They were El Kalay, Lamdassem, Nyonkuru and Sarwatt.

At 8km Sarwatt was dropped by El Kalay, Lamdassem and Nyonkuru, and during the last lap it developed into a tactical race between Lamdassem who went to the front ahead of El Kalay and Nyonkuru. Sarwatt managed to catch-up with the leading trio who battled it out for the final win during the last lap. With 28:44 on the clock Lamdassem launched his attack breaking away to romp home in the final straight in 28:58 beating El Kalay by two seconds.

“It was a tough race because what mattered today was the tactical battle for the European Cup’s win. I am happy because I improved my second place from last year in this event in Bilbao,” said Lamdassem.

After the bell Felix, Bekele and Moreira forced the pace and broke away. They fought it out hard for the win during the last lap. Felix took the front closely followed by Bekele, while Moreira lost ground. The race became a battle between Bekele and Felix. With 20:00 on the clock Bekele launched her kick pulling away from Felix to take the win in 20:28 by three seconds over Felix.

“I suffered from a cold last week and I was not in my best shape. This was not an easy race because the course was slippery and a bit tough for me,” said Bekele.