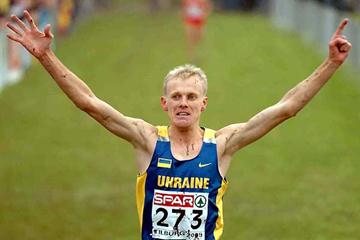 If there was any doubt that Sergiy Lebid is the continent’s King of cross country, he dispelled them immediately after unleashing his now trademark kick en route to his fifth straight, and sixth overall, European title at the SPAR European Cross Country Championships.

Despite a 12 second margin of victory over Spaniard Alberto Garcia, Lebid insisted his latest title was anything but a chore.

“It was a very difficult race,” the 30-year-old Ukrainian said, “one of the toughest I’ve had in a long time. I just wanted to go out there and be near the front, but not too quickly. And then just wait for the finishing kick. And that’s what I did.”

Waiting for the precise moment to pounce

That is precisely what he did. Letting others do the leading, among them Gunther Weidlinger of Austria and the Spaniards Garcia and Juan Carlos de la Ossa, Lebid held back, deliberately calculating the precise time to make his move. It came two seconds before the 25:00 minute mark, just after Lebid and Garcia passed the bell, side-by-side, running stride for stride. He charged on unchallenged for a 27:09 run over the 9.84km course.

“I was concentrating on that precise point, when I would make the move,” said Lebid, who said he couldn’t underestimate Garcia’s aggressive front-running. “When training, I knew that there would be some strong Spanish runners here. He’s the European 5000m champion, so of course I had to be careful of him.”

“It was an intense race,” Lebid continued. “It was very, very hard.” Besides his collection of six golds - he won his first in 1998 - a silver from 2000 and a bronze from 1997, Lebid has the unique distinction of being the only male athlete to have competed in all 12 editions of the championships. (Anja Smolders, who was 55th in the women’s race, is the only woman to have competed in all 12.)

For his part, Garcia was never challenged for the runner-up spot, replacing compatriot de la Ossa as silver medallist.

“Before the race, I thought I could beat Lebid today,” Garcia said, “but now I’ll have to wait to do it next year.” Like Lebid, Garcia’s primary focus for 2006 will be a possible 5000/10,000m double at the European Championships in Gothenburg.

With a powerful second half performance, Driss Maazouzi of France finished third, repeating his finish from last year.

“My main goal was to win the team title,” said Maazouzi. “The atmosphere in our team is really good. So we tried to secure the team title during the race.”

With four runners in the top-ten, France easily took their third straight team title, tallying just 21 points, the second best score ever at these championships. Only Portugal's 20 point tally at the inaugural edition in 1994 was better. Garcia and de la Ossa (ninth) led Spain to a runners-up finish with with 64 points, with a surprise Ukraine squad taking he bronze with 71 points. Italy, last year's silver medallists, were fourth with 75 points.

“It was a good race for me,” said Bené, who edged Andy Vernon of Great Britain by just a second in 18:41 over the 6.5Km course. “The race was fast, but I managed to have a good sprint finish in the end.”

In a tight contest, 10 runners were within a second of each other with a lap to go, Bené, the European junior 5000m champion, led for much of the race. However, he didn’t make his decisive move until the waning stages to break away from Vernon. Dusan Markesevic from Serbia and Montenegro had a strong kick of his own to nearly overtake Vernon, but fell short by the narrowest of margins. Both were credited with 18:42 performances.

“I started off well, and got into a good position,” said Vernon. “But I knew that was fast.”