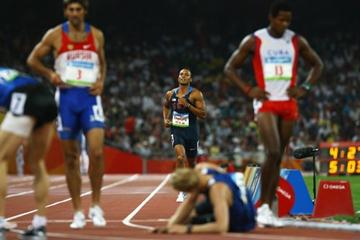 Bryan Clay (USA) added the Olympic title to his resume in addition to the World Championships win which he captured in Helsinki 2005. Clay, who was the clear world leader before the competition and only favourite for the gold, had an extremely strong start to the decathlon, and was even going for the World record after three events.

Although he faded a bit after that, a very good Discus Throw and Pole Vault followed by a season’s best in Javelin Throw gave him a clear win. In the 1500m Clay faded badly and finally missed the Olympic record 8893pts by more than 100pts finishing with a 8791 total score.

The fight for the silver medal was tough and Leonel Suárez, the fastest 1500m runner in the field decided to go for it from the start. But that tactic didn’t work as Suárez started to slow down in the last lap and Andrei Krauchanka (BLR), in second place after nine events, overtook him in the final straight to keep the silver medal position to himself.

Krauchanka scored 8551 for the silver and Suárez 8527, a Cuban national record for the bronze, a huge feat for the 20-year-old athlete who only last season went over 8000 for the first time. His national record before the Olympics was 8451 from earlier this season and his series included four personal bests with the total score being fifth.

A big surprise behind the top three was that like Suárez, also all the other top 1500m runners failed to run their usual times and therefore Aleksandr Pogorelov running 5:01.56 was fourth in the competition with 8328 points. Romain Barras (FRA) ran well, 4:29.29, and was able to go past Roman Sebrle (CZE) in the total points with 8253 for the Frenchman and 8241 for the World record holder, a season’s best for both.

Oleksiy Kasyanov (UKR), a real surprise name who came to the competition only with a personal best of 8086, came very close to Sebrle scoring 8238 after a 4:28.94 1500m. Andre Niklaus (GER) was eighth with 8220, and 2007 World Championships silver medallist Maurice Smith was only ninth this time with 8205 total points.