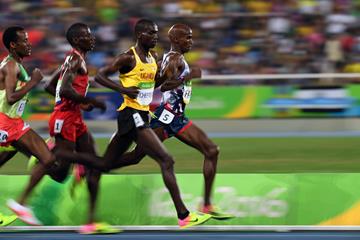 Farah announces return to the track for 2020

Four-time Olympic gold medallist Mo Farah has announced he will return to the 10,000m on the track next year in a bid to win a fifth Olympic title in Tokyo.

The British distance runner hung up his track spikes at the end of 2017 after the World Athletics Championships in London, where he earned his sixth world title by winning the 10,000m and claimed silver in the 5000m.

He shifted his focus to the roads in 2018, placing third at the London Marathon and then winning in Chicago with a European record of 2:05:11.

“It has been really exciting to compete in the marathon for the past couple of years,” said Farah, who won Olympic 5000m-10,000m doubles in 2012 and 2016. “To win the Chicago Marathon, a major marathon, was nice. To finish third at the London Marathon was good.

“It’s been a great learning curve for me. Doing a marathon and to run 2:05, a European record, it was very exciting. The training for it was totally different to the track.

“I have decided that next year at the Tokyo 2020 Olympic Games I’m going to be back on the track,” he added. “I’m really excited to be competing back on the track and to give it a go in the 10,000m. Hopefully I haven’t lost my speed, but I’ll train hard for it and see what I can do. It’s exciting.”

Farah’s last 10,000m on the track was at the 2017 World Championships where he won in 26:49.51 with Uganda’s Joshua Cheptegei finishing second. Cheptegei, the world cross-country champion, has now succeeded Farah as the world champion at the distance after the 23-year-old won in Doha in 26:48.36.

Should Farah recapture his speed from his peak track-racing days, it would make for a mouth-watering clash against Cheptegei, one of the most exciting distance runners in the world at present.

If Farah, who will turn 37 in March next year, earns a medal or even simply finishes in the top 10 in Tokyo, he will make history. No one aged 37 or older has ever finished in the top 10 in a men’s 10,000m final at the Olympic Games. Mamo Wolde was 36 years and four months when he earned silver in 1968, while fellow Ethiopian Miruts Yifter was 36 years and two months when he claimed gold in 1980.