Ahead of the 2013 World Athletics Gala in Monaco, Russia High Jump stars Anna Chicherova and Svetlana Shkolina faced the media on Friday (15), the former having won at the 2011 IAAF World Championships and London 2012 Olympic Games and the latter taking the honours at this summer’s World Championships on home soil in Moscow.

Joining them on the IAAF’s red sofa was the Italian High Jump legend Sara Simeoni, the winner of three Olympic medals including the 1980 Olympic title in Moscow.

Q: Svetlana, looking back three months, what were your emotions at the World Championships this summer?

A: Some time ago, I watched the World Championships competition again, and I lived through the whole set of emotions again. I was very nervous beforehand.

I knew I had to watch what I had to do with my hands, what to do with my legs, and do what my coach (former Olympic champion Sergey Klyugin) had told me to do. He said to me: “This is the time, this is the place.” I knew I was ready and in condition to win the gold medal.

I also knew where my parents were sitting, where my boyfriend was sitting, but I was still really nervous. But when I had my failure at 1.93m, strangely I just relaxed after that; everything after that was really easy.

When the (Russian) girls were winning the 4x400m, I could see that they were leading and that they would get the gold medal, and they gave me a lot of power and energy. At 2.03m, looking back, I know I didn’t remember how I ran, or what I did, but after I cleared the bar I opened my eyes and saw that I was over.

The next day, when I was going to the medal ceremony, it took me one-and-a-half hours to get from the car park to the stadium, people wanted my autograph. I was amazed because that had never happened to me before. I was so happy for myself but also that athletics was becoming so popular in Russia.

Q: Svetlana, tell us more about your season in general. You didn’t compete as much and even missed the indoor season.

A: Of course, we always planned to focus on Moscow but the fact that we took a different approach and missed the indoor season was not on purpose.  I had some minor injuries in the winter, I originally wanted to do two competitions indoors, but I couldn’t in the end. In the summer, I had some arguments with my coach as I wanted to win the Diamond League and he didn’t want me to do some meetings but, in the end, he let me do them.

Q: Sara, in your opinion, what are the differences between your era and now?

A: Firstly, there weren't many occasions when the top competitors were together. We didn’t meet with the athletes from Eastern Europe so that gave me so much motivation in the big competitions.

I was away from athletics for some time, but it is obvious the training methods have changed. What we did was Jurassic (laughs). We understood that we were changing the technique from the straddle to the Fosbury Flop, opening the angle of the approach, but we were still innovating and we still had the legacy of the straddle.

In my time, coaches would also train their athletes in one specific way. Now, coaches in different events take things from other events. I think training must now be a bit more fun.

I was very unmotivated during training. The highest bar I ever jumped at in training was 1.95m. I’m sure that the top athletes today try to clear bars that are higher.

Q: Sara, you started competing in major competitions not long after the advent of the Flop. How did you get introduced to with it?

A: I was supposed to start straddling, but I said let’s try this (the flop). The problem was, of course, the landing area. It was just pieces of spongy material and really difficult to jump on to, I was very afraid. I think that’s why I made my big arm movement (a signature part of Simeoni’s jumping style) because I was afraid of the landing; I tried to turn this into something positive.

One anecdote I have from those days is that my father loved the fact that I was doing athletics. He used to come to the track with a box of chocolates, and gave me some if I jumped over a height. It’s amazing I didn’t end up as a shot putter.

Q: Anna, who do you think apart from yourself and Svetlana will be the big stars in high jumping in the near future?

A: There are the other Russian girls, (Mariya) Kuchina has many possibilities to jump high, Alessia Trost, Blanka Vlasic, the Swedish girls and, of course, Brigitta (Barrett) but there could also be some new names.

Q: Svetlana, what is your relationship like with Anna?

A: I’ve known Anna for about five years and I admire her for the way that she came back after giving birth, I would give her a medal for that. I would not say that we are close friends but we are certainly not enemies, we have a friendly relationship.

BACK
Pages related to this articleAthletes
Sara Simeoni 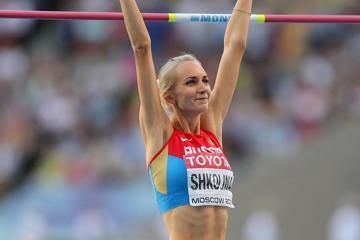