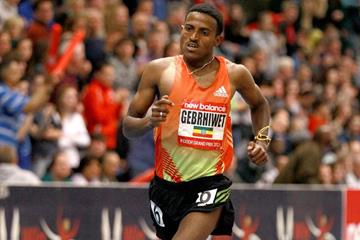 Three Olympic medallists set to clash over 3000m in Boston

Olympic 5000m silver and bronze medallists Paul Chelimo and Hagos Gebrhiwet will take on Olympic 800m bronze medallist Clayton Murphy at the New Balance Indoor Grand Prix when the US middle-distance runner steps up in distance at the IAAF World Indoor Tour meeting in Boston on 28 January.

Gebrhiwet has made it on to the 5000m podium at the past two IAAF World Championships, finishing second in 2013 and third in 2015. His best time for 3000m indoors, 7:32.87, is the New Balance Indoor Grand Prix meeting record, the North American all-comers’ record and the world U20 indoor record.

Chelimo will be making his New Balance Indoor Grand Prix debut. The 26-year-old took a surprise silver medal over 5000m at the Rio 2016 Olympic Games, setting a lifetime best of 13:03.90 in the process.

Lyles is the world U20 champion at 100m. Before winning that title in Bydgoszcz last summer, Lyles finished fourth in the 200m at the US Olympic Trials, breaking the long-standing national high school record with 20.09.

Lyles will compete in the 300m in Boston, while Josephus Lyles, Noah’s 18-year old brother and a double world U18 medallist, will race over 60m.

Donavan Brazier won the NCAA title at 800m in 1:43.55, breaking both the NCAA and US U20 records that had been set 50 years earlier by Jim Ryun. Brazier will be racing over 600m in Boston.

These athletes will be joined at the event by the previously announced Olympic champions Matthew Centrowitz, Jenn Suhr, and Ekaterini Stefanidi, and Olympic bronze medallists Jenny Simpson and Emma Coburn.