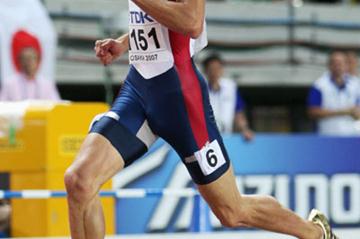 Aged 23, Wariner is ahead of Johnson, a fellow Texan, at the same age. He is more than half a second quicker and a younger Olympic champion.

Of course Johnson also won one Olympic and two World titles at 200 metres and Wariner has yet to touch that distance on either stage. But give him time. He has been considering doubling at the 2008 Beijing Olympics. Furthermore, Johnson holds the World record for both events. Again give him time.

Speaking from his training base in Waco, Texas, in March, Wariner said:  “I was hoping to try to do it this year, being that I am already world champion in the 400. But, with the way the schedule turned out, it is not possible. Hopefully the schedule at the Olympics will be different. I will focus on the 400 at the US trials – the 400 is always before the 200 – then try and qualify at 200.”

As Wariner recorded a personal best of 43.45 here, moving up from equal third fastest in history to outright third, Johnson’s World record of 43.18 is coming increasingly into view. “I knew it was going to be a fast time,” Wariner said.

There had been speculation that Wariner might challenge Johnson’s mark here but the athlete said: “My main concern was getting the victory – whatever I crossed the finish line in I was going to be happy with. One thing I wanted to do was get a personal best and I got it.

“I PRd, I surpassed as the lone third person in the world, now I am just looking forward to running faster. All the goals I have for myself – to break the world record, to be the first to go sub 43, and to stay undefeated as much as possible.”

As much as having Johnson’s career achievements ahead of him, Wariner has LaShawn Merritt challenging from behind. Merritt (as well as third-placed Angelo Taylor) featured in a US sweep, with the silver medallist clocking 43.96 (No8 all-time). “Merritt broke 44 for the first time in his career and me and him are going to be battling through the rest of our careers,” Wariner said of the 21-year-old Merritt.

Given the sweep, Wariner said of his team’s relay prospects: “With the way all three of us ran today, whoever we put on that other leg I have a feeling we can end up winning with that.”

Johnson is now Wariner’s agent. “But, besides being my agent – working out my deals for meets and giving me my money – he is a role model in my life,” Wariner said in March. “My first memory of the sport was the 1996 Olympics and just seeing him break the World record in the 200 (19.32sec) was the biggest thing I have ever seen.”

Rather than see Johnson’s career record as overshadowing his, Wariner takes the view that he would gain even greater recognition by emulating an icon such Johnson than he would if the greatest 400m runner in history was a relative nobody. “It is good being compared to him and his times,” Wariner says. “It is good that his (World) record is there and knowing in my heart that I can get it. If he wasn’t there before me, I would not have the goal to try to break his record.

“Everything he has done, I am trying to do more. I think he ran 23 sub 44s and I want to run more than that by the end of my career. I want to be the first one to run under 43sec, so if I do that I will end up having the World record. I am building my own name and people are realising what I am doing.”

With a passion for cars - “a Mercedes SLR, if I can ever afford it,” he said in March  – Wariner’s other release from the daily demands of training is his dog, a St Bernard named Heidi. He is coached by Clyde Hart, Johnson’s former coach, at Waco’s Hart-Patterson Stadium, where his training partners include Sanya Richards, the 2006 IAAF Female World Athlete of the Year.