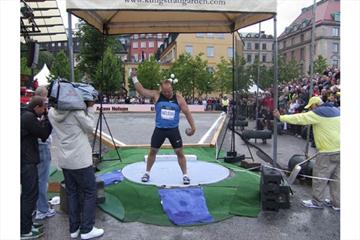 A huge put of 20.33m in heavy persistent rain achieved by Nadezhda Ostapchuk of Belarus was the high statistical point at the DN Galan’s ‘Big Shot’ competition in the Kungsträdgården, in the centre of the Swedish capital this afternoon (21).

The DN Galan, is a Super Grand Prix status meeting within the IAAF World Athletics Tour 2008, and the main programme will take place tomorrow evening in the 1912 Olympic stadium.

Thankfully, the male shot putters were spared the same deluge by the time their competition began, with USA’s 2005 World champion Adam Nelson pumping up, and in turn gaining motivation from, the audience of over 800 who packed closely around the shot circle and landing area which had be specially constructed for the event. The American’s winning distance was not so impressive - 20.75m - as that of the Belarussian but this afternoon was more than just about results.

The 27-year-old Ostapchuk who leads the world list this summer with her 20.90m win at the national championships on 8 July, was the only one of the five strong field of women to master the exceptionally tricky conditions which called for the circle to be mopped with towels after ever attempt. Her 20.33m came in the second round. The start of the competition had to be delayed for over 30 minutes due to the heavy rain which was accompanied by thunder and lightning.

Throughout it all, bringing back memories of the devoted Finnish crowd who sat out in all weathers at the 2005 World Championships in Helsinki, a brave band of Stockholm citizens stuck like limpets to the ever more sodden tribune of spectator seating. Nestled under umbrellas these 500 or so stalwarts put up such a show of defiance that even nature relented enough for the warm-up and then the competition proper to finally begin, though there was never a moment during the women’s competition when the air was dry.

Ostapchuk summed it up politely, “well the conditions were not ideal but we are still pleased to be here in this very special competition,” and with another thunderstorm beginning the competition – with the agreement of all five women – was halted towards the end of the fifth round.

Earlier Trinidad and Tobago’s Cleopatra Borel-Brown had screamed out her new season’s best of 18.87m for second place. Germany’s Nadine Klienert, visibly the most frustrated of all the competitors with the weather conditions, managed literally slide her way across the circle to an 18.61 best effort for third place.

The whole afternoon was thoroughly well packaged, a huge brightly decked stage area on which the athletes were presented and prizes awarded prizes, rock and pop music to introduce each competitor and attempt, and large video hoardings and lights additionally helping to psych up crowd and athletes alike.

The continuing thunderstorm delayed the start of the men’s competition by about 40 minutes. However, thankfully when the men did come out to warm-up and compete, the rain had stopped completely, though as a precaution a small gazebo with a canvas roof and open sides had been erected directly over the circle to protect against any further down pour.

“Mr. Showman”, as Nelson was announced to the crowd before each attempt, sauntered up and down the side of the landing area energetically clapping his hands above his head until the crowd, in unison did the same each time. Despite such motivational techniques it was not to be until the very round that the competition really sparkled with Nelson producing his winning put (20.75), Jamaican Dorian Scott his best of the day for second (20.37), and 2008 World Indoor champion Christian Cantwell, 20.35, for third.

“I love this environment, it’s the perfect environment for us which the other throws would also benefit from,” confirmed Nelson. “There are very few opportunities which we have where we can interact with the fans with this sort of intimacy.”

“It’s a phenomenal environment which should have produced better throws, it’s just a little frustrating that we had the rain delays as I think that tightened everybody up. It took everyone quite a few throws to find their right rhythm.”

“Circle was great, it’s the first time I have thrown under a tent, and the crowd were great, all in all it was really cool,” said Nelson with a huge smile on his face. “This is my kind of stage.”