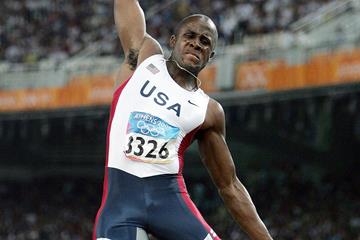 Phillips - 'USA jumpers are back'

“Dominance” is an often overused descriptor to characterise greatness on the Athletics field. But it is a genuinely appropriate term to describe American supremacy in Olympic Long Jump competition.

Counting the interim Games of 1906, jumpers from the United States have won 21 of 25 Olympic Long Jump titles.

On Thursday night, Dwight Phillips claimed the 22nd. Underscoring traditional American strength, in all but three of those 22 wins, at least two medals were captured. In Athens, Phillips was joined on the podium by silver medallist John Moffitt.

“We’re following in the footsteps of such great jumpers,” the 26-year-old Phillips said, listing the names of athletes he’s admired, studied and emulated. “Mike Powell, Carl Lewis, Bob Beamon, Ralph Boston. And now you have Dwight Phillips and John Moffitt.”

Only three long jumpers have ever leaped farther in Olympic competition than Phillips’s winning 8.59 leap, while only three silver medallists have gone farther than Moffitt’s 8.47.

“I knew if I came out strong I had a good chance to medal,” said the 23-year-old Moffitt, who added nearly 20 centimeters to his personal best with his third round leap. “I just didn’t overdo it. I just wanted to come out there and just compete to the best of my ability. The night was crazy.”

While Phillips, the World champion both indoors and outdoors last year, was an overwhelming favorite, Moffitt was not, and Phillips was clearly impressed with his younger compatriot’s performance in the Olympic spotlight.

But he couldn’t match the competitive ferocity Phillips has acquired since his eighth place showing in Sydney four years ago.

“I was ready to go as far as it would have taken to win,” Phillips said. “I haven’t lost a competition this year, and I definitely didn’t want to start here.”

But for a brief time some 12 years ago, when Carl Lewis was preparing for his second of four consecutive Olympic Long Jump titles, the likelihood that Phillips would even appear on the Olympic stage seemed an impossibility. When he was fourteen, Phillips was hit by a motorcycle, an accident in which he suffered two broken legs.

“Doctors thought I would never walk again,” he said, “but my parents and I new that I would,” seemingly surprised that he was even asked about the incident. “I didn’t think that story was that big of a deal. But anyway, I overcame that and now I’m Olympic champion.”

Besides their common penchant for jumping very far, Phillips, from Georgia, and Moffitt, a native of Louisiana, display a common southern charm, though Moffitt, the fresh-faced newcomer, remains the more shy of the two. But just barely.

“We made a statement that USA jumpers are back,” he said. “Watch out.”