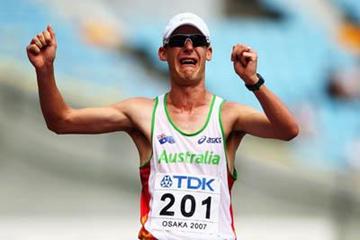 One of the most lauded athletes in Australian athletics history, Deakes’s illustrious 17-year career began with a bronze medal at the 1996 IAAF World Junior Championships in Sydney.

Deakes also won a bronze medal in the men’s 20km race walk at the 2004 Athens Olympic Games, but his biggest and most memorable successes are his men’s 50km race walk World record (3:35:47) in December 2006 and a gold medal one year later at the IAAF World Championships in Osaka.

He concluded his international career at the 2012 London Olympic Games.

"London was always slated as my final race,” said Deakes. “Finishing on my own terms was extremely important to me because I withdrew from Beijing with injury. The last four-and-a-half years have been incredibly difficult with constant injury and not being able to complete the training loads that I once could. But it was all put into perspective with the birth of my first child, Mia, just six weeks after London.

“The biggest highlight for me was winning the World Championships in Osaka. That was a strange year because I’d spent so much time on the side-lines early in the year, before I based myself in Northern Tuscany and achieved some great continuity in training when it mattered most, so to win was really special.

“The world title came the year after I set the World record at home in Geelong in December 2006. We race in some pretty obscure places as race walkers, but to be able to race well in front of family and friends in my home town was great. The World record was the icing on the cake after what was already a super experience.”

With his World record having since been surpassed by Denis Nizhegorodov, Deakes will retire as the second-fastest 50km race walker in history and the fifth-fastest in the 20km event.