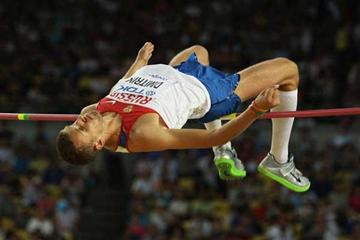 The 37th edition of the special High Jump with music meeting in the German city of Arnstadt saw 2011 IAAF World Championships silver medallist Aleksey Dmitrik go over a world-leading height of  2.36m on Saturday (2).

He cleared 2.30m, 2.33m and then an indoor personal best of 2.36m all on his second attempt. His winning height also equalled his best outdoors.

Greece’s Kostadinos Baniotis was second with 2.27m. Russia’s Sergey Mudrov and Bahamas’s Donald Thomas were third and fourth, also going over 2.27m, but the positions behind Dmitrik were decided by countback.

Belgium’s 2008 Olympic Games winner Tia Hellebaut returned only on Tuesday from a training camp in South Africa but showed good form by going over 1.96m with her first attempt to win.  She then had three good attempts at 1.98m.

Spain’s 2012 European champion Ruth Beitia was second with 1.94m while Estonia’s Anna Iljustsenko was third at the same height, which was a national indoor record for the jumper from the Baltic.

Tumi had given notice he was in good shape when he clocked a personal best of 6.59 in his heat.

In the women’s 60 m Hurdles, there was another Italian win as Marzia Caravelli clocked 8.11.

Luiz Alberto de Araujo was second in a Brazilian record of 5916 points, the second best ever by a South American multi-events exponent.