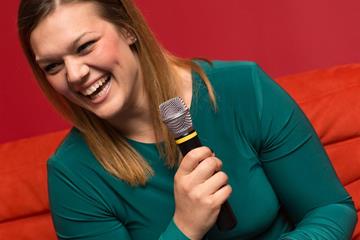 Ahead of the 2013 World Athletics Gala in Monaco on Saturday, World and Olympic Discus champion Sandra Perkovic spoke to the press about her past season and her goals for next year.

“I used to do other sports like basketball and handball, but eventually I found out that I’m better by myself as an individual, so I started to throw the Discus. When I was younger I won a few medals, but none of them were gold and I was a bit said about that.

“In 2009 I had significant surgery and nearly died. I lost 15kg and thought I’d never be able to throw again. But I started training again and I won the European Junior Championships that summer with an ‘A’ standard for the World Championships in Berlin. I went there and saw how to compete with the top throwers in the world. No one expected me to do anything, but I threw close to my PB in qualifying, almost 63 metres, and made the final. The others were suddenly saying ‘who is that girl?’ and I just said ‘see you next year, girls’. From then on, my career started going up.

“During my career I’ve had a lot of pain and a lot of motivation but also a lot of luck.

“When I first arrived, no one liked me very much because they maybe thought I was too young and too focused on what I was doing because I didn’t talk with anyone. They maybe thought, ‘Who’s that girl? She doesn’t talk, she’s so arrogant’. But after a few years they realised I was normal.

“I love my sport and I enjoy training. Sometimes I suffer in training, sometimes it’s hard and sometimes I even cry. But I still want to go out and train. When I hang out with friends I realise that I live in a different world to them. They’ll say things like, ‘how can you train? It’s the summer holidays’. I say, ‘yes, but my goal in life is to go to major championships and achieve great results’.

“Throwing 70m is very important to me; it’s my goal for the next season. No one has done it for many years and that’s what pushes me. What will be my goal after I break 70 metres? Breaking 72 metres.

“I love to compete at competitions in big stadiums. All the Diamond League meetings are held in big stadiums with no wind, so I’d like to throw 70m in that setting first. Maybe afterwards I’ll go somewhere like Salinas and try to throw 72 metres.”