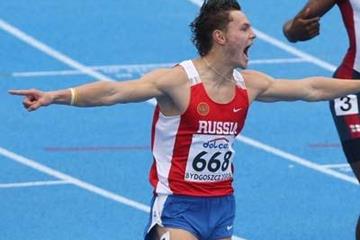 The city of Bydgoszcz seems to bid well for the Shabanov family.

18-year-old Konstantin, the pre-event favourite to win the men’s 110m Hurdles World Junior title, fulfilled the expectations by taking gold in a new World Junior leading 13.27 twenty nine years after his father and coach Georgiy won the European Junior bronze medal in the same event and at the same venue.

Father also a medallist in Bydgoszcz

Shabanov senior who had run 14.24 to win his only international medal in 1979 was an extremely proud father as he was watching his son take a well deserved lap of honour.

“I am obviously very proud,” said the 48-year-old who is also Konstantin’s individual coach. “I have been waiting for this moment for a long time and for it to happen here in Bydgoszcz it’s something special.”

Konstantin was the class of the field, his World Junior leading time and national junior record of 13.32 set on 17 June in Cheboksary making him the hottest favourite for gold. But it wasn’t just the record books who made him the favourite, it was the manner in which he mastered the heats and the semi-finals.

Undefeated outdoors this year, Shabanov ran a very aggressive race in today’s final, taking the lead from the gun and increasing it with his every step. A flawless hurdling technique and a natural speed helped him cross the line with 18 hundredths of a second to spare and enough time to raise his arms in victory.

“I feel very good,” he explained through the help of a translator. “I am the best junior runner in the world so of course I can only be satisfied. I just did what I had to do.”

Hoping to be in Beijing

Shabanov who will be competing at the Russian National Championships held from 17-20 July in Kazan with the aim of upsetting the seniors and maybe grabbing an Olympic qualifier, admits that he has seldom competed over the 1.06m high hurdles as opposed to the Junior 90cm hurdles.

“I don’t do the high hurdles very often. I do not have a personal best on senior hurdles but I am aiming to perform well in our senior championships in Kazan,” he revealed.

A native of Pskov located in the north-west of Russia about 20km east from the Estonian border, on the Velikaya River, Shabanov made his beginnings in athletics aged 13 inspired by his father.

“I did a bit of everything, all the disciplines of the decathlon, the Long Jump especially and the hurdles of course. But I decided to specialize in the hurdles because of my father. I wanted to be like him.”

Shabanov who trains seven days a week and reveals he has no time for anything but athletics training, competed in the second track final on the last competition day here in Bydgoszcz after a two-hour rain storm left the track wet and humid.

“It didn’t matter that the track was wet,” he explained. “I am used to these circumstances because in Russia we have very similar weather.”

A Moscovite student, Shabanov explained he would have not much energy left to celebrate his victory.

“I am very tired, I have been training very hard and the competition here was tough. This is the quickest I’ve ever run and it’s never easy to run a personal best.”