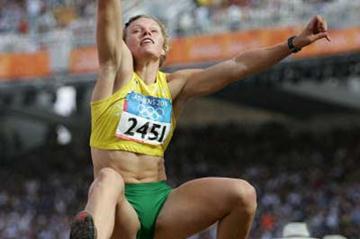 Lithuania’s Austra Skujyte, the Olympic Heptathlon silver medallist, broke the World record** for the women's Decathlon on Friday (15 April) with a total of 8366 points.

The event became recognised for World record purposes on 1 January 2005, with the winning mark of Marie Collonville 8160 points - set in Talence, France, on September 2004 – established as the inaugural World record on that date.

The event was part of the University of Missouri's second annual Audrey Walton Combined Events in Columbia in what was the first IAAF-sanctioned women's Decathlon competition held in North America.

Skujyte scored 3898 points on day one, registering a personal best in the 400m (57.19). To start day two, Skujyte ran the 100m Hurdles in 14.22. Following in the Long Jump, she leaped 6.12m. And then Skujyte separated herself from Collonville's record pace with a 16.42m Shot Put. The former Kansas State Wildcat, then went on to the High Jump, clearing 1.78m.

In the 1500m Skujyte needed only to run the race in 5:53.82 to break the record, and managed that task easily with a 5:15.86 clocking improving on the previous World record mark by 216 points.

The route to the record -

Tom Lewis - University of Missouri - for the IAAF