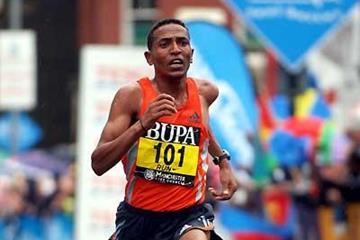 Eritrean Zersenay Tadesse and Ethiopia’s Berhane Adere were respectively the winners of the men’s and women’s races in today’s BUPA Great Manchester Run, which witnessed a host of national records fall though Haile Gebrselassie's UK All-Comers' mark of 27:25 remained out of reach.

Berhane Adere, the World 10,000m track champion in 2003 and the silver medallist last summer in Helsinki, was the inaugural Manchester 10km winner three years ago, and regained the title when setting an Ethiopian and meeting record of 31:07.

Adere's finishing speed won the day for the 32-year-old, although beforehand she didn't even believe she was in shape to win the race, never mind clock a lifetime best.

"I didn't feel brilliant before coming here and I wasn't sure at all how I would perform," said Adere just a month ago after smashing Wami's national record in the Flora London  Marathon. "It was a tough race with plenty of people around until well past the halfway mark. I found the longer I ran the better I felt."

The men's event was almost as spectacular with the three top finishers also breaking the Eritrean, Tanzanian and Ugandan records.

A fierce burst of finishing speed carried Zersenay Tadesse to the second fastest-ever 10km seen on British soil, when holding off the challenge of World Half Marathon champion Fabiano Joseph, and Boniface Kiprop, the Commonwealth Games gold medallist.

Joseph, the winner of the BUPA Great Edinburgh Run over the same distance a fortnight ago, survived until Tadesse unleashed a fabulous sprint 400m from the line, to win by five seconds in 27:36.

"That was a hard race, particularly the last couple of kilometres," said Tadesse the Olympic 10,000m bronze medallist, who finished runner-up here two years ago when setting his previous Eritrean record of 27:59. “They didn't make it easy for me, but I enjoy a tough fight.”

Tadesse admitted all three thought beforehand there was the possibility of breaking the UK All-Comers's record of 27:25 set by Haile Gebrselassie. But after a very tough confrontation against his fellow African's, he was more than content after moving to second place in this year's world rankings.

"I'm happy with just winning - that became the most important thing when we broke away and made it a race between the three of us," said the 24-year-old Eritrean winner of last autumn's BUPA Great North Run.